All These F-22 Raptors Went into the Sky Simultaneously. The Reason Is China. 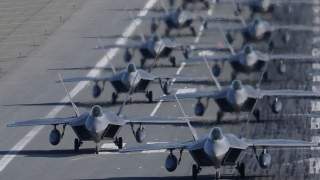