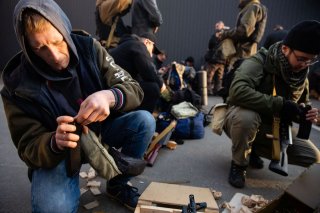 American shooters are still hunting to find affordable ammunition. Even as production has ramped up, prices are still far higher than pre-pandemic levels. This is thanks to high demand, the ongoing supply chain bottlenecks, and record inflation. As a result, it could be well into next year before prices decline even slightly.

Now, another factor could further impact the supply and cost of ammunition in the United States: the war in Ukraine. Many of the raw materials used in the production of ammunition could end up going to military contractors across the world, and nations across Europe have all vowed to increase military spending, which will certainly include beefing up stockpiles of small arms ammunition.

Russian-produced ammunition was also banned as part of the sanctions against Moscow, and those likely won't be lifted anytime soon.

Over the weekend, AMMO Inc. CEO Fred Wagenhals announced that his firm will send one million cartridges to Ukraine following calls from Ukrainian president Volodymyr Zelensky. The ammunition manufacturer will reportedly send the cache of rounds to Ukraine free of charge.

"First of all, I believe in the Second Amendment," Wagenhals, who made his fortune in NASCAR before founding his company, told Fox 10 News in Phoenix. "I also believe in freedom and democracy."

Wagenhals said that he responded to the call Zelensky made when he was offered safe passage out of the capital of Kyiv. Zelensky reportedly told U.S. officials that he needed “ammunition, not a ride."

The ammunition, which would be worth around $700,000, will be produced at the company's facilities in Wisconsin and then will be delivered via a private plane. Wagenhals is now waiting for the green light from the United States government.

"AMMO, Inc. Offers to Donate One Million Rounds of Ammunition to the Armed Forces of Ukraine in Support of Their Fight for Freedom," the company posted on social media last week.

AMMO, Inc. was just the first company to pledge such support. Remington Arms announced on Friday that it would also send a million rounds of ammunition to Ukraine.

Though the pledges from the companies earned praise from many on social media, a few individuals expressed frustration that the rounds would be sent overseas even as shelves remain bare in parts of the United States.

"How about replenishing shelves to a reasonable price, before giving away millions of rounds. We could gear up with 5.56 while you replace their needed 7.62x39," wrote one user, while another added, "But you can't send 100 to my local [Walmart], thanks."

As some pointed out, these companies produce billions of rounds annually. According to the National Shooting Sports Foundation (NSSF), the firearms industry trade association, at least twelve billion rounds are manufactured annually in the United States. It is safe to say that American shooters won't be facing a worsening shortage simply because a few companies are offering to help the people of Ukraine defend their homeland.