Ankara’s New Look: ​​Turkey Is Now ‘Türkiye’ at the UN 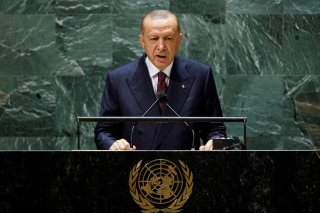 At the request of the Turkish foreign ministry, the United Nations (UN) has officially changed the country’s name at the organization from “Turkey,” its traditional rendering in English, to “Türkiye,” its Turkish spelling.

UN spokesman Stephane Dujarric confirmed the change on Thursday, announcing that Turkish foreign minister Mevlut Cavusoglu had written a letter to Secretary General Antonio Guterres requesting that the UN use the name “Türkiye” for all UN functions.

“It’s not an issue … for us to accept or not accept,” Dujarric said of the name change. “Countries are free to choose the way they want to be named.”

Cavusoglu first announced the message to the UN on Tuesday, claiming that he had formally submitted renaming requests to the United Nations and several other international organizations in which Turkey participated.

“Together with our Directorate of Communications, we have been successful in preparing a good ground for this,” Cavusoglu’s statement read.

The transformation of Turkey into “Türkiye” began in December 2021, after Turkish leader Recep Tayyip Erdogan requested that the public begin to use the domestic spelling for international use.

“‘Türkiye’ is accepted as an umbrella brand for our country in national and international venues,” Erdogan claimed, adding that the new name was “the best representation and expression of the Turkish people’s culture, civilization, and values.”

The name change has largely failed to catch on outside Turkey. Turkish news organizations, including the state-run Turkish Radio and Television Corporation (TRT) and the Anadolu Agency, have adopted the new name, but most other publications have not. The name change has also been subject to domestic controversy, with Turkey’s political opposition arguing that it represented a pointless and unnecessary distraction from other issues facing the country, including a soaring inflation rate and ongoing crises with its neighbors.

In discussing Cavusoglu’s decision, Dujarric noted that changes “[don’t] happen every day, but it’s not unusual that countries change their names.” As evidence, he cited the example of Cote d’Ivoire, a small West African nation known by most English speakers and referred to at the UN as “Ivory Coast” until 1986.

The most recent country to adopt such a name change, the Southern African country formerly known as Swaziland, changed its name to Eswatini in 2018 due to the colonial origin of the former name and the desire to avoid confusion with Switzerland.