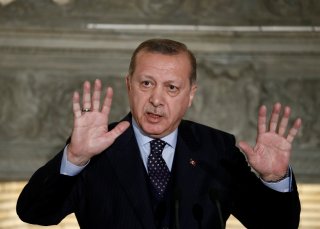 Turkish president Recep Tayyip Erdogan announced on Wednesday that his country would halt discussions with Greece over the status of Greco-Turkish disputes in the Mediterranean Sea after what he characterized as a series of provocations from Athens, including reported airspace violations over disputed territories by Greek aircraft.

In 2021, as part of Erdogan’s broader push to improve relations with his neighbors, Ankara and Athens opened bilateral discussions over the status of disputed territories in the Aegean Sea. However, these discussions failed to make progress and were observed to frequently give way to acrimony between the two sides.

In Erdogan’s remarks, he announced that the discussions, titled the “High-Level Strategic Council,” would be canceled. Erdogan explicitly framed the cancellation as retaliation for the airspace violations, which he described as an indication of Greece’s broader shift away from diplomacy and toward intimidation.

“You keep putting on shows for us with your planes,” the Turkish leader said of the airspace violations. “What are you doing? Pull yourself together.”

“Do you not learn lessons from history?” he added, apparently referring to Turkey’s war of independence against Greece. “Don’t try to dance with Turkey. … We are no longer holding bilateral talks with them. This Greece will not see reason.”

Erdogan had previously criticized Greek prime minister Kyriakos Mitsotakis for allegedly urging the Biden administration not to sell additional F-16 aircraft to Ankara during a visit to the United States. After that incident, Erdogan insisted that the Greek premier “no longer exist[ed]” to him and refused any further meetings. In turn, Mitsotakis criticized Turkey’s behavior at an EU summit on Tuesday, describing Erdogan’s words as a “personal insult” and warning that Ankara’s behavior constituted a series of “provocations which cannot be tolerated by Greece or the European Union.”

Turkey and Greece have long sparred over the maritime boundaries between their two nations in the Aegean Sea, as well as refugee policy and the issue of Cyprus, which is divided between the pro-Greek south and the pro-Turkish north. Following the claimed airspace incursions, Turkish foreign minister Mevlut Cavusoglu argued that Greece’s actions violated an international agreement specifying that the Aegean should be demilitarized.