Another Reason the Stealth F-35 Might Be the Ultimate Weapon 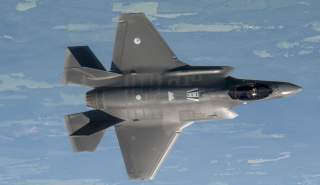 Once operational, this expanded F-35 intercept ability will better defend surface ships operating in the proximity or range of enemy missiles by giving integrating an ability to destroy multiple-approaching attacks at one time.

The Pentagon’s F-35 has conducted test attack missions in tandem with other aircraft, surface ships and ground weapons as part of its maturation as both a multi-role fighter and aerial “node” or sensor system able to acquire and relay target information.

Alongside its widely discussed “attack” weapons and technologies, including a 25mm cannon along with air-to-air and air-to-ground weapons, the F-35 is increasingly being developed as a platform able to perform “drone-like” targeting and surveillance missions.

Referring to the F-35s long-range sensors and ISR capabilities, Pentagon officials have told Warrior Maven that the aircraft has cued land weapons and surface ships in recent exercises.

“The F-35s ability to integrate with air, ground and sea platforms is there. We do missions at Edwards AFB where we integrate with aircraft carriers and destroyers,” Lt. Col. Tucker Hamilton, F-35 Test Director, Edwards AFB, told reporters. “We have been able to work with these assets to prosecute simulated attacks.”

“The F-35 is doing ISR and could possibly deliver a weapon on the same flight. We can then use what they can generate on the ground, fusing sensors and target acquisition with things that can deliver effects,” the senior defense official told Warrior.

The multi-domain F-35 development is fundamental to the Pentagon's current push to better integrate air, land and sea combat systems to adapt to a serious and fast-changing near peer threat environment.

The aircraft can relay targeting data through its own data link and on-board sensors such as its Distributed Aperture System (DAS) and Electro-Optical Targeting System (EOTS); these sensors acquire and organize targeting information using long-range cameras, infrared cameras, radar-warning receivers and data-base “library-like” technologies such as “mission data files” used to identify emerging threats against a known database.

These instances of cross-domain fires also hinge upon growing connectivity between air assets as well, such as the F-35 and F-22.

The Air Force is now developing technologies to enable greater interoperability with the F-35, F-22 and 4th-gen aircraft. This includes the addition of more LINK 16 data-link technology to the F-22. Lockheed and the Air Force are planning some initial flight tests of this transmit improvement by the end of this year.

Once fielded, the F-22 TACLink 16 will enable the F-22 to receive and transmit with other platforms, such as the F-35, F-16, F-15 and others, Air Force officials told Warrior Maven in written statements.

The Navy is already building, deploying and testing a fleet of upgraded DDG 51 Arleigh Burke-class destroyers with an integrated ship defense using an F-35 as an aerial sensor “node.”

Recognizing the growing need for multi-domain warfare connectivity, the Navy has been testing the F-35 as an indispensable aerial “node” in an integrated ship-based weapons system such as Naval Integrated Fire Control – Counter Air (NIFC-CA).

NIFC-CA has been successfully tested in recent years with an F-35, using a land-based "desert ship" at White Sands Missile Range, N.M.

Should the Navy's future plans materialize, the system would expand further to include the F/A-18 and F-35C, developers have explained.

NIFC-CA gives Navy ships the ability to extend the range of an interceptor missile and extend the reach sensors by netting different sensors of different platforms -- both sea-based and air-based together into one fire control system.

A multi-target ability requires some adjustments to fire-control technology, sensors and dual-missile firings; the SM-6 is somewhat unique in its ability to fire multiple weapons in rapid succession. An SM-6 is engineered with an "active seeker," meaning it can send an electromagnetic targeting "ping" forward from the missile itself - decreasing reliance on a ship-based illuminator and improving the ability to fire multiple interceptor missiles simultaneously, Raytheon weapons developers have told Warrior Maven in prior interviews.

The system hinges upon an upgraded ship-based radar and computer system referred to as Aegis Radar –- designed to provide defense against long-range incoming ballistic missiles from space as well as nearer-in threats such as anti-ship cruise missiles.

Unlike an SM-3 which can be used for "terminal phase" ballistic missile defense at much farther ranges, the SM-6 can launch nearer-in offensive and defensive attacks against closer threats such as approaching enemy anti-ship cruise missiles. With an aerial sensor networked into the radar and fire control technology such as an F-35, the system can track approaching enemy cruise missile attacks much farther away.

Once operational, this expanded F-35 intercept ability will better defend surface ships operating in the proximity or range of enemy missiles by giving integrating an ability to destroy multiple-approaching attacks at one time.

The NIFC-CA technology can, in concept, be used for both defensive and offensive operations, Navy officials have said. Having NIFC-CA could enable surface ships, for example, to operate more successfully closer to the shore of potential enemy coastlines without being deterred by the threat of long-range missiles.