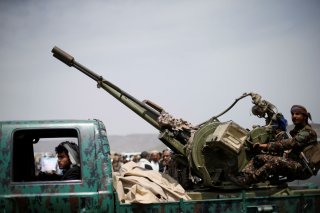 A Saudi-led Arab coalition launched a series of airstrikes against sites in Houthi-controlled northern Yemen on Monday evening.

The airstrikes on Houthi targets came after a Houthi drone attack in Abu Dhabi, the capital of the United Arab Emirates (UAE). That strike, widely described as a terrorist attack, resulted in three civilian deaths and six injuries.

A coalition statement released by the state-run Saudi Press Agency (SPA) indicated that the coalition’s operation had targeted “terrorist leaders” to the north of Sana’a, Yemen’s capital, which has been occupied by the Houthis since 2015.

Turki al-Maliki, the Arab coalition’s spokesman, claimed that the Abu Dhabi attack amounted to a “war crime.” Maliki also tied the attack to Iran, whose leaders previously threatened Emirati officials over their conduct in Yemen.

“This escalation and [the] hostile behavior of the Iranian-backed terrorist Houthi militia confirms the threat of this terrorist militia and its undermining of regional and international security,” Maliki said. The spokesman underlined that the Saudi-led coalition would continue to take whatever “necessary operational measures to deter these hostile behaviors.”

The UAE has played an influential role in the ongoing war in Yemen. Although it has given nominal support to internationally-recognized president Abdrabbuh Mansour Hadi in the past, it is widely believed to support the separatist Southern Transitional Council (STC), a militant movement that controls Aden, the largest city in the country’s south. However, its continued participation in the Saudi-led coalition against the Houthis has led the militant group to remain hostile toward the UAE. Although the Houthis’ cross-border drone attacks have mainly targeted Saudi Arabia, Houthi leaders have threatened retribution against the UAE as well.

The Arab coalition’s actions in Yemen have been incredibly controversial. Both the coalition and the Houthis have been accused of war crimes, including intentional attacks on civilian targets and the use of starvation as a weapon of war. In February 2021, two weeks after his inauguration, President Joe Biden announced that U.S. military support for the coalition would immediately end, although he has since been criticized for failing to pressure Saudi and Emirati leaders to end the war.