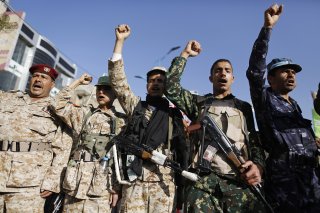 Saudi Arabia announced that it had conducted an airstrike against a Houthi rebel camp near Sana’a, the Houthi-controlled capital of pre-war Yemen, as part of a broader aerial campaign to drive back the Iran-allied rebel group.

The Saudi-led coalition, which has supported the government of President Abdrabbuh Mansour Hadi against rebels in both the north and the south, has intensified airstrikes in Yemen in recent months, attempting to make progress against the Houthis to incentivize stalled peace negotiations.

The strike on Sana’a was launched as an “immediate response to [the Houthis’] attempt to transfer weapons from Al-Tashrifat camp in Sana’a,” according to the state-run Saudi Press Agency. The strike successfully destroyed several weapons storehouses in the country’s capital before their contents could be moved, the agency reported.

The Saudi intervention in Yemen has continued since 2015 but has made little progress against the Houthis, who have largely secured the country’s northern region and continued to press south. Since February, a battle has raged between Hadi’s forces and the Houthis over the city of Marib, Hadi’s last remaining stronghold in the north, which the rebels have tried and failed to capture.

Across Yemen, tens of thousands have been killed, leading to a humanitarian crisis that the United Nations characterizes as the world’s worst. UN investigators have implicated that the Houthis and the Saudi-led coalition have committed war crimes.

The role of Iran in the conflict is contentious. Saudi Arabia has accused the Iranian government of supplying arms and advisers to the rebels, which Tehran has consistently denied. However, attempts to smuggle arms from Iranian waters into blockaded Yemen have periodically been uncovered, with the U.S. Navy discovering and sinking an illicit arms shipment earlier in the week.

The Houthis are subject to a UN arms embargo but have nonetheless acquired advanced weaponry, including ballistic missiles that the group has launched into Saudi Arabia. The bombing was preceded by a missile attack on the Saudi city of Jizan in which two of the city’s residents, a Saudi and a Yemeni, were killed.

The Saudi-led coalition indicated on Sunday that the Houthis had fired 430 ballistic missiles and 851 explosive drones into Saudi Arabia since the start of the war.

These attacks have killed fifty-nine Saudi nationals, according to spokesman Turki al-Maliki.