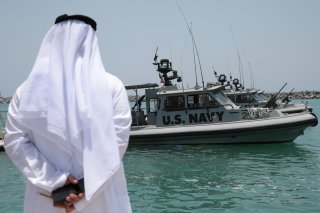 The U.S. Navy’s Fifth Fleet announced on Wednesday that crews from two of its ships, the USS Tempest and USS Typhoon, had boarded a stateless vessel in the North Arabian Sea and captured a hidden cargo of illicit weapons onboard.

The ship’s smuggled cargo included 1,400 Kalashnikov assault rifles, as well as more than 200,000 rounds of ammunition, according to a statement released by the Fifth Fleet.

The cargo was “assessed to have originated in Iran and transited international waters along a route historically used to traffic weapons unlawfully to the Houthis in Yemen,” the statement read.

Each of the vessel’s five crew members were identified as Yemeni nationals and were taken into custody, and the fleet indicated that they would all be returned to Yemen. After the crew and cargo were removed from the vessel, it was “determined [to be] a hazard to navigation for commercial shipping” and sunk.

It is unclear what, if any, charges the five crewmembers will face. Yemen is subject to a UN arms embargo, which restricts the supply, sale, or transfer of weapons to the Houthi rebels in the country’s north.

However, the vessel was “assessed to have originated in Iran,” according to the statement.

Iran has supported the Houthi militant group in northern Yemen since the beginning of its 2014 civil war. The following year, an Arab coalition led by Saudi Arabia intervened militarily in the country; although military leaders in Riyadh initially predicted that their war would take three weeks, it has now dragged on for nearly seven years, in part due to Tehran’s aid to the Houthis.

Saudi Arabia and Iran have de-escalated their tensions in recent months, meeting in a high-profile summit in Baghdad, Iraq—a nation long viewed as a battleground in their regional rivalry. However, the Houthis have largely spurned peace negotiations, regarding themselves as winning the conflict and seeing little reason to negotiate.

The Navy’s press statement compared Wednesday’s bust to a similar incident in May in which anti-tank missiles, rocket-propelled grenades, sniper rifles, machine guns, and assault rifles were seized from a different stateless vessel traveling along roughly the same route.

The statement also noted that the Fifth Fleet had seized roughly 8,700 smuggled weapons traveling through its designated territory since the beginning of 2021.