Are the U.S. and Russia Headed Towards Another Naval Showdown? 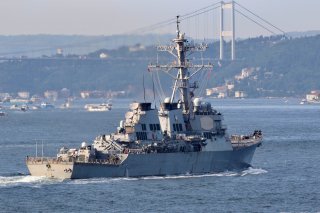 Fresh off the HMS Defender scandal, the Kremlin is again expressing concern over another North Atlantic Treaty Organization vessel conducting operations in its claimed territorial waters.

Russia’s National Defense Management Center announced on Saturday that it is monitoring the movements of the U.S. guided-missile destroyer USS Ross: “The forces of the Black Sea Fleet have begun to keep a close watch on the actions of the US Navy destroyer Ross, which entered the Black Sea on June 26,” read the center’s statement. The last of the Flight I Arleigh Burke-class guided-missile destroyers, Ross was commissioned in 1997. Ross was one of four Arleigh Burke destroyers in Spain to be upgraded in 2016 with a unique electronic warfare system, weapons targeting enhancements, and the Phalanx Close-In Weapons System.

Ross entered the Black Sea as part of the annual Seabreeze exercises between the United States and Ukraine, which began in late June and will run through July 23. “The exercise scenario designed to bring together military forces from North and South America, Europe, Africa, Asia, and Australia to test multiple warfare disciplines in the sea, on land, and up in the air, including surface warfare, land operations, anti-submarine warfare, air defense, and explosive ordnance disposal techniques,” read a statement from the U.S. Sixth Fleet. Top Ukrainian military officials added that this year’s installment of Seabreeze will be the “will be the largest since 1997,” drawing in as many as thirty-two participating countries providing around five thousand troops, thirty-two ships, and forty aircraft.

“Ross, forward-deployed at Naval Station Rota, Spain, is conducting naval operations in the U.S. Sixth Fleet area of operations in support of U.S. national security interests in Europe,” added the statement. “The U.S. Navy routinely operates in the Black Sea consistent with international law, including the Montreux Convention . . . Ross is one of four U.S. Navy destroyers based in Rota, Spain, and assigned to Commander, Task Force 65 in support of NATO’s Integrated Air Missile Defense architecture.” Ross arrived in the Ukrainian port city of Odessa in 2019, one of several visits from NATO vessels that year. Ukraine regularly grants NATO forces passage and port access to conduct exercises near Russia’s claimed maritime borders.

Among other foreign policy objectives, Seabreeze is meant to signal Washington’s support for Ukraine’s territorial integrity amid the ongoing diplomatic standoff between Russia and the West. Chargé d’affaires of the U.S. Embassy in Ukraine Kristina Kvien added that the “USS Ross’ participation in this year’s Sea Breeze maritime exercise is a tangible demonstration of U.S. support for Ukraine and is necessary now more than ever.” One of the central geopolitical issues at play is the status of Crimea, which was annexed by Russia in 2014 but remains internationally recognized as part of Ukraine. Last week, Russia’s Coast Guard and the Black Sea fleet fired warning shots and dropped bombs to chase away the Type 45 destroyer HMS Defender after the British vessel ventured as far as three kilometers into Russia’s claimed territorial waters off the Crimean coast.