Did Russia Chase a British Destroyer Away with Bombs? 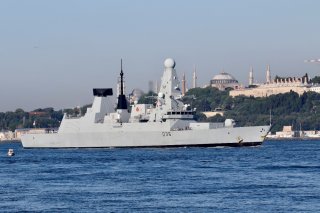 The Russian military said it fired warning shots and dropped bombs to chase a British destroyer out of waters claimed by Moscow, an account disputed by London.

On Wednesday, Moscow said that the British Type 45 destroyer HMS Defender ventured as many as three kilometers into Russian territorial waters off the Crimean coast. "At 11:52 on June 23 this year, the UK Navy’s guided-missile destroyer Defender operating in the northwestern part of the Black Sea crossed the state border of the Russian Federation and moved 3 km into the territorial sea near Cape Fiolent,"  read a statement issued by the Defense Ministry, adding that the Defender received, but did not heed, warning that weapons would be employed if it “trespasses the border of the Russian Federation.”

"At 12:06 and 12:08, the border guard patrol ship conducted warning fire,” the statement continued. “At 12:19, a Su-24M plane carried out preventing bombing (four OFAB-250 bombs) along the route of the guided-missile destroyer Defender.” The Ministry said that the Defender left Russia’s waters at 12:23, following joint countermeasures by the Coast Guard and Black Sea Fleet.

London acknowledges the ship’s reported route but disputes everything else about the Russian account. “This morning, HMS Defender carried out a routine transit from Odesa towards Georgia across the Black Sea,” Defence Minister Ben Wallace. “As is normal for this route, HMS Defender entered an internationally recognized traffic separation corridor. She exited that corridor safely at 0945 BST (British Summer Time). As is routine, Russian vessels shadowed her passage and she was made aware of training exercises in her wider vicinity,” Wallace added. London added that the alleged warning shots were part of an unrelated “gunnery exercise,” and that no bombs were dropped.

But Russia’s Defense Ministry said that the Defender was in “blatant violation” of the 1982 UN Convention on the Law of the Sea, also summoning the UK Defense Attache at the Ministry’s Main Directorate on International Cooperation to register a complaint. Russia annexed the Crimean peninsula in 2014 from Ukraine, which leveraged the incident in support of Kiev’s NATO accession ambitions. Ukraine's Foreign Minister Dmytro Kuleba said the event was “clear proof of Ukraine’s position: Russia’s aggressive and provocative actions in the Black and Azov seas, its occupation and militarization of Crimea pose a lasting threat to Ukraine and allies… we need a new quality of cooperation between Ukraine & NATO allies in the Black Sea.” Kuleba’s statement seemingly contradicts the British position that Russia did not take any aggressive or provocative military actions against HMS Defender.

The facts of the incident remain unclear as of the time of writing, as the British and Russian accounts are largely irreconcilable on key points. Military expert Michael Kofman noted that the Black Sea region is no stranger to spoofing, radio interference, and other forms of disinformation between Russia and NATO, adding in a following tweet that the Russian account of warning shots fired and bombs dropped is “likely to be fiction.” Citing an alleged eyewitness account by a BBC journalist aboard the Defender at the time of the incident, Foreign Ministry spokeswoman Maria Zakharova accused London and the British embassy in Moscow of “lying” about the incident. “Next time you want to ‘peacefully enter,’ knock first,” she added.

Military tensions between Russia and NATO have become routine in the Baltics and the Black Sea since the 2014 Euromaidan crisis and Russia’s subsequent seizure of Crimea, bringing a steady stream of aerial interceptions and maritime confrontations. Nevertheless, it would be premature to dismiss the Defender incident as merely a typical kind of East-West saber-rattling. British analysts were caught off-guard by the severity of Russia’s reaction: "…the Russian response is extraordinarily robust, a tad undiplomatic and way over the top,” retired Royal Marines Colonel Mark Gray told Reuters.

Harsh as it may be, Moscow’s response aligns with a series of recent tonal shifts signaled by the Putin administration. In an op-ed for German publication Die Zeit marking the 80th anniversary of the Nazi invasion of the Soviet Union, Putin called NATO “a relic of the Cold War” that has “degraded” European security. Capitalizing on the diplomatic momentum generated by the Geneva summit, Putin proposed a new security settlement to eliminate what he sees as the corrosive, binary choice between NATO and Russia that has been foisted on Europe: "We are open to honest and constructive interaction. This is confirmed by our idea of creating a common space of cooperation and security from the Atlantic to the Pacific Ocean which would comprise various integration formats, including the European Union and the Eurasian Economic Union," he wrote.

Beyond its ongoing efforts to challenge NATO’s purpose in the post-Cold War international system, the Kremlin’s recent actions are driven by a more immediate set of policy concerns. To the extent that the Defender’s incursion was meant to gauge Russia’s resolve to enforce its territorial claim on Crimea, the Kremlin’s reaction provides an unequivocal reply: Moscow will brook no challenge, whether military or diplomatic, to the status of Crimea. Reiterating his comments from earlier this month, Putin underlined that Ukraine’s accession to NATO is the reddest of red lines for Russia. Russia’s vigorous reaction to the Defender may be an effort to set firm boundaries on, if not discourage, the rising wave of military cooperation between Kiev and NATO, most recently exhibited by the imminent 2021 installment of the joint Ukraine-NATO Seabreeze drills in the Black Sea region. Kiev has consistently granted NATO’s Black Sea forces passage and port access to conduct exercises near Russia’s claimed maritime borders. Russia’s military has vowed to “react appropriately” to NATO and Ukrainian military movements along the Russian border.