How Russia Views the Geneva Summit 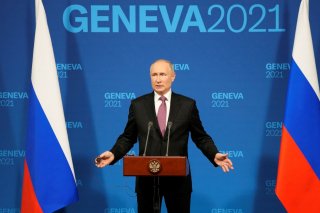 The Kremlin and some in Moscow are moving forward with cautious optimism for the future of US-Russia relations, but the two sides have yet to find common ground on a slew of outstanding policy disagreements.

In the weeks leading up to the June 16 summit between President Joe Biden and Russian President Vladimir Putin in Geneva, Kremlin officials joined their American counterparts in projecting lowered expectations. “It’s obvious that the negative potential that has accumulated in our bilateral relations has some inertia,” Kremlin spokesman Dmitry Peskov said during a conference call with reporters. “So it’s hard to expect that it would be possible to reach understanding on deep disagreements during just one first meeting.” But Peskov’s post-summit messaging was decidedly more positive: “We warned from the very beginning against exaggerated expectations in connection to the summit, but we can now say, firstly based on the President’s assessment, it proceeded more with a plus sign.”

Putin, for his part, not only expressed satisfaction with the content of the meeting, but offered a gleaming personal appraisal of his American counterpart: “the image of Biden, that is drawn by our, and even by the American press, has nothing to do with reality.” Putin rebuffed the charge, widely leveled by Biden’s American and Russian critics, that the U.S. President appeared confused and disoriented at various points throughout his trip: “He is on a long trip, he flew from the ocean, so-called jet lag, time zone changes. Essentially, even when I fly, it can derail a person.”

Putin noted that Biden “is completely engrossed in the subject matter,” adding that the President is “a professional. You have to be very attentive when working with him so that you don’t miss anything. I can assure you he doesn’t skip a beat, that much was completely obvious to me.” He continued: “I’ll repeat it again: he is assembled and knows what he wants to achieve. And he does it very skillfully. That can be felt immediately.” In an apparent reference to Biden’s domestic detractors, Putin added “I very much hope that it won’t be like in previous years, and he [President Joe Biden] is allowed to work unobstructed.”

It remains to be seen if the preponderance of prominent Russian commentators and journalists, whose assessment of Biden has been less than flattering in recent years, will adjust their tone to reflect Putin’s post-summit optimism. Beyond personal appraisals of Biden, Russian observers have reacted to the results of the negotiations between the two leaders with tepid approval. The very fact of the meeting, requested by Biden, was taken by some as a kind of moral victory; a clear sign that Putin’s Russia has emerged from its 1990’s slump and is again a great power to be reckoned with. “Now, they have to negotiate with us,” said Russian political scientist Dmitry Abzalov on Russian television, adding that Putin’s post-summit press conference was at least as, if not more, important than that of Biden.  “If that wasn’t a necessity, no one would do it.” Journalist Alexei Naumov added that the negotiations do not amount to a reset between Moscow and Washington, but should instead be considered a “relaunch” on the newfound basis of mutual respect between the highest levels of Russian and American leadership.

There is likewise a general recognition that Putin scored a tactical victory with Biden’s explicit reaffirmation of Washington’s support for the Minsk format, though Russian observers remain skeptical that it will be enough to overcome the years-long impasse between Russia, Ukraine, and the west over the lack of progress in enforcing the agreement’s key provisions. Russian Senator Alexey Pushkov lauded the two leaders’ agreement to begin consultations on cybersecurity but expressed concern that Moscow could be seeing a repeat of the 2018 Helsinki summit. “Trump in Helsinki discussed the creation of a working group on cybersecurity. We were ready for that. But when Trump returned to the U.S. after his meeting with Putin, congressional democrats and the media launched into hysterics: how could you negotiate with the enemy? Trump backpedaled from the idea. Now it turns out that it was the right idea,” Pushkov said on Russian television. “... I want to see actions [rather than words]. How will everything that they agreed on be realized? I’d like to take it on trust, but I would like to see real action too,” he added. These reactions reflect Moscow’s overarching concern, illustrated in Geneva by Biden’s tense exchanges with reporters and through broadsides launched by his detractors at home, that the Biden administration lacks the political capital to lay the long-term foundations for meaningful cooperation with Russia even if it wanted to.

Despite mutual assurances of continued dialogue across a wide range of topics including the arctic, climate change, and arms control, concrete agreements on any of these issues — not to mention the ongoing Donbas crisis or the larger ideological clash over human rights and national sovereignty — remain elusive. Only time will tell if the Geneva summit managed to plant the seeds for the kind of substantive and consistent dialogue needed to bridge the vast policy gulf that has accumulated between Russia and the United States