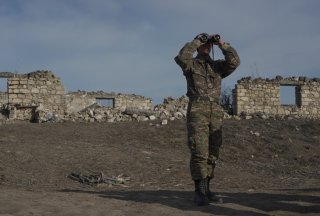 Following border clashes between Armenia and Azerbaijan that left at least one soldier dead, the two sides have reached a ceasefire, calming fears that the flare-up in violence could lead to a renewed conflict.

The clashes on Tuesday are the latest round of border violence between the two countries, which have opposed one another politically since their independence from the Soviet Union. The nations dispute the mountainous Nagorno-Karabakh region, which has long had an ethnic Armenian majority but belonged to Azerbaijan during the Soviet era due to a Stalin-era internal border change.

As the Soviet Union declined in the late 1980s and Moscow’s central authority waned, secessionist ethnic Armenians pushed for the territory’s reunification with Armenia, and the territory’s parliament voted to join Armenia in 1988. Although Moscow refused to permit the change, it catalyzed regional secessionism, and following the independence of the two nations, they fought a war to resolve the disputed territory’s status. Armenia eventually emerged victorious in 1994, although the region remained officially independent and did not unify with Armenia. However, in the fall of 2020, Azerbaijan struck back, initiating a six-week war from September until November, during which it decisively defeated Armenian forces and recaptured large swaths of the Armenian-occupied territory.

The ceasefire ending the 2020 conflict was mediated by Russia, which has stationed troops in Armenia and played a key role in resolving tensions in the Caucasus. In the November 2020 settlement ending the last war, Russian peacekeeping troops were assigned to patrol the Lachin Corridor, a narrow strip of land connecting Armenia to the Republic of Artsakh, the ethnic Armenian proto-state within Nagorno-Karabakh. The corridor was briefly closed on Sunday after an unspecified incident between Armenian and Azerbaijani forces.

Russia also mediated the ceasefire ending Tuesday’s clashes, with both sides agreeing to cease hostilities at 6:30 P.M. local time, according to the Armenian defense ministry. The United Nations and the European Union had also pushed diplomatically for a ceasefire.

Earlier reports from the day had suggested that, in addition to the death of one Armenian soldier, twelve others had been captured by Azerbaijani forces, and Armenian troops had lost control over two military positions on the two countries’ border.

It was not clear which side started the clashes, and both sides blamed each other.