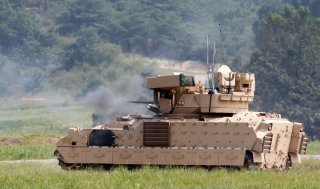 Many of the initial requirements and “vision” for the Army’s Optionally-Manned Fighting Vehicle remain fully intact, yet the strategic developmental path has morphed a bit and moved away from the immediate receipt of ready-built prototypes. The service still wants the main element of its Next-Generation Combat Vehicle to emerge this decade, after having realigned its approach by putting a stop to the early prototyping, by instead using digital modeling to fast-track the developmental time frame. The concept is also to improve technical quality at the same time. The Army seeks to be more efficient than fully constructing, testing, analyzing and assessing completed prototypes. Prototyping will still very much be part of the process, it is just that the Army seeks to leverage promising technologies digitally.

Despite the nuances and various trajectories that have been associated with the OMFV development, many of the core sought after attributes remain the same. For instance, in an essay about the new OMFV strategy, an Army report cites the requirements characteristics as “survivability, mobility, growth, lethality, weight, logistics, transportability, manning, and training.”

The requirements, the report cites, “will further be refined through a cooperative and iterative process with industry, digital design competitions and Soldier touchpoints to produce the final prototypes for testing.”

Indeed, many of the sought after attributes can be very well explored through computer modeling. For instance, Army developers have told Warrior that the new vehicle will likely operate with a three-man crew, carry six-soldiers in back and ultimately fire a 50mm cannon. The new longer-range “TOW missile-compatible” weapons may arm the new platform, senior Army developers said, as a way to destroy enemy armored vehicles at a safer stand-off range. Also, these new missiles are very likely to be configured with newer, more varied explosives able to destroy enemy tanks, armored vehicles and infantry formations to a much greater extent than existing weapons can.

AI-enabled sensors and targeting technology will also be a pivotal technology when it comes to engineering a vehicle that is both highly-mobile and survivable. When it comes to new sensor technology, there are several pertinent areas of technical exploration. Improved 3rd-Gen Forward Looking Infrared sensors will bring higher-resolution targeting, longer-range technology and massively improved computer technology. Computer-enabled autonomy will help operators organize incoming sensor data from otherwise disparate nodes.

New sensor technology is, naturally, closely aligned with cameras and video surveillance for the vehicle; Next Generation Combat Vehicle requirements call for a 360-degree array of cameras around the vehicle, as a way to alert crews of approaching threats from all directions.

AI is also quite likely to be indispensable to the “optionally-manned” portion of the requirement, as it can draw upon algorithms to function autonomously to test enemy defenses, travel at high speeds, perform advanced ISR functions and even fire weapons. In this kind of scenario, humans would of course operate in a role of command and control, allowing self-driving machines to confront the highest risks.