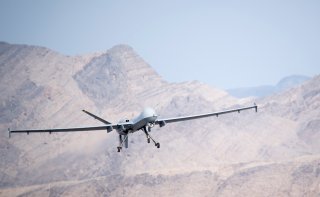 There is a significant amount of evidence to suggest that the Army is now achieving breakthrough success with its long-standing vision and hope to truly network the force for high-speed, multi-domain attacks.

The service’s Project Convergence, a series of “learning” experiments in the desert that started in 2020, has been able to truncate sensor-to-shooter timelines to speeds the Army used to only dream of. Using AI-enabled computers to quickly analyze otherwise disparate pools of sensor data in milliseconds, these systems can recommend an optimal “shooter” ahead of or even inside of the enemy’s decision cycle. As a result, Project Convergence has been able to demonstrate massively accelerated warfare at what is called the “speed of relevance.”

Forward-operating mini-drones, for instance, were able to locate high-value target details at standoff distances before quickly transmitting targeting data to larger drones, helicopters, AI-enabled computers, and even ground-based armored vehicles, all in a matter of seconds. Senior Army weapons developers long familiar with the service’s ambitions and modernization efforts describe Project Convergence as a massive breakthrough.

“I think that some of the things that we've demonstrated in Project Convergence have absolutely been breakthroughs, and the use of artificial intelligence to find targets and all this data—the secretary and the chief have talked recently a number of times about data centricity going forward … data is the new ammunition of the future,” Maj. Gen. John Rafferty, director of the Long Range Precision Fires Cross-Functional Team at Army Futures Command, told the National Interest.

There is a fascinating and valuable history behind the Project Convergence breakthroughs, which are rooted in years of Army innovation and modernization efforts. Project Convergence arguably achieves the operational successes that were envisioned decades ago during the development of an integrated, software-programmable radio called the Joint Tactical Radio System (JTRS). Tested and developed for many years, JTRS was designed as a multi-domain, secure, and high-speed communications backbone for the Army’s canceled Future Combat Systems program.

The idea was to securely transmit internet protocol (IP) packets of voice, video, and data using NSA encrypted high-bandwidth waveforms. The many variants of JTRS—including vehicle-integrated Ground Mobile Radios, Handheld, Manpack, and Small Form Fit (HMS) radios, and even air variants—were intended to enable multi-domain data-sharing networks without needing to rely upon a fixed infrastructure. Each JTRS radio was not only a point of transmission but also a router itself, making it capable of supporting the expansive effort. At one point, small HMS radios were attached to the wing of a Shadow drone to ensure line-of-sight connectivity between ground and air assets and enable information exchanges in rigorous terrain.

Here is the question: do any of these concepts sound familiar? The ambitions of the JTRS program, which never fully came to fruition, align clearly with the Army’s current breakthrough success with Project Convergence.