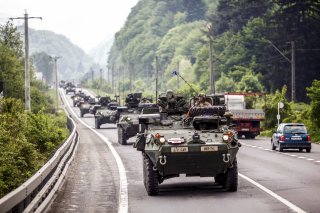 The U.S. Army is revving up for Project Convergence, an annual “experiment in learning” wherein the service places breakthrough technologies into tactical situations, putting soldiers and a new generation of weapons, drones, platforms, and artificial intelligence (AI) computing to the test.

Since 2020, Project Convergence has been pushing the envelope of the much discussed “sensor-to-shooter” timeline to get inside of an enemy’s decision cycle and make time-sensitive decisions first. Using the AI-capable FireStorm system, mini-drones, also called Air Launched Effects, can relay target data specifics to larger drones, helicopters, and ground attack platforms, which can then organize and transmit the information to human decisionmakers. The targeting and sensor-to-shooter pairing process used to take as long as twenty minutes, but with AI and a “meshed” network of sensors, the process is now being done in twenty seconds. This is truly a paradigm-changing breakthrough, as advanced algorithms employed by AI-capable computers can organize otherwise disparate pools of sensor data and identify the optimal weapon, shooter, or countermeasure for a given combat circumstance in a matter of seconds.

Now in its third year, the Army’s Project Convergence experiment has evolved to incorporate more joint, multi-domain connectivity. Moreover, it is now expanding to include NATO allies as well.

“Until we started experiments, especially the mixing of system experiments with operational experiments, we truly never understood both. Number one: the operational value that we were trying to get out of it, nor could we achieve it. We also didn’t understand, quite frankly, what could be, I would say, when conflict arises—that’s too late. So we have to get after it. It’s paramount,” Todd told the National Interest in an interview.

This synergy between the operational and experimental is exactly what Project Convergence seeks to capture and learn from, as emerging technologies regularly change maneuver formations, tactics, and overall approaches to combined arms maneuvers. For instance, a multi-domain-capable networked force with longer-range sensors and high-speed data processing can enable a more dispersed yet highly lethal force in ways that have never been possible before. A mini-drone can identify a target and, in a matter of seconds, transmit specifics to an AI-empowered database to immediately determine the best method of attack. The idea is to fight at the “speed of relevance” and destroy an enemy at safer standoff ranges before being detected.

“Last year, Project convergence last year was aimed at sensors and shooters, right, and many of those are artillery. The reality is what we’re after is all sensors and the best shooter all the time……so linking and integrating sensors,” Todd explained.