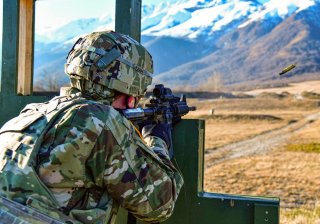 Tracking enemy activity, finding targets, and attacking with weapons is all now happening in a matter of seconds due to U.S. Army networking breakthroughs. Truncating the much-discussed “sensor-to-shooter” time through an interconnected, high-speed, and AI-enabled Kill Web has been the focus of the Army’s now multi-year Project Convergence experiment.

While Army Futures Command Commander Gen. John Murray told me the exercise is still very much an “experiment” and a “learning project,” he did acknowledge the massive breakthroughs which took place last September during the first Project Convergence at Yuma Proving Grounds, Ariz. A kill process that used to take minutes is now happening in seconds due to advanced networking, computer processing, and the use of both manned-unmanned teaming as well as unmanned-unmanned teaming. High-speed attack and a new warfare paradigm are beginning to emerge as the Army is preparing for Project Convergence 21.

Part of the success of Project Convergence 20 relied upon the use of forward operating mini-drones, called Air Launched Effects, which found targets over hostile, high-threat enemy terrain while possibly facing incoming fire and then sent back target coordinates to larger drones and helicopters operating at a safer standoff distance. This targeting data was then accelerated into an AI-enabled ground computer system called Firestorm which processed the information, bounced it off a limitless database to optimize weapons response, and make recommendations to human decision-makers. This multi-node process unfolded in a matter of seconds during Project Convergence 20 while Army weapons developers and decision-makers found, tracked, and destroyed enemies from ground and air.

The service is now finalizing plans for Project Convergence 21, which Murray told me will further expand the mission envelope to incorporate more weapons, networking transport layers, and, perhaps most of all, more multi-domain joint operations.

“We pulled in the Air Force, Navy, Marine Corps. And we sat down. And we basically said that, you know, the army, we, the army, don't want you to just bring your stuff to Yuma in my experience, also White Sands this year, to plan our exercise, we really want to work together to figure out the most pressing joint problems from a project, you know, the same type of approach,” Murray told The National Interest earlier this year.

This means more F-35 stealth fighters, multi-service drone connectivity, and, most likely, the use of Army-Air Force targeting data connectivity and weapons employment. For instance, the Army will be employing newly configured mini-drone Air Launched Effects released from helicopters to scout high-risk areas and network sensitive data in real-time.

Despite what many call the “breakthrough” success of Project Convergence 20, Murray seems set on raising the bar higher for 2021.”

“Not everything worked, right. And then as I said out there, that's okay. Because this is about learning,” he said. “You remember the focus for 20 was just that ‘sensor-to-shooter’ look. We will continue to expand upon the ‘sensor to shooter’ look from indirect fire and direct fire perspective.”