The Army Is Preparing to Send Robotic Warfighters to Battle 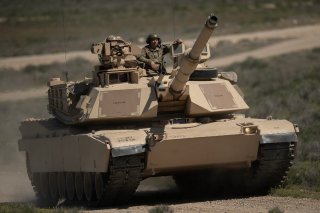 At both the Association of the U.S. Army 2021 and 2022 Annual Meeting and Expositions, General Dynamics Land Systems (GDLS) showcased a new ten-ton robotic platform engineered for a range of different hardware configurations and mission sets.

“We took sensor packages and integrated them into the robot, made it architecturally capable of incorporating a variety of mission packages and data processing capability to allow input from sensors to be redistributed as necessary,” Don Kotchman, vice president of GDLS, told The National Interest in an interview last year.

Artificial intelligence (AI)-enabled computer systems can bounce incoming sensor data off of an existing database to draw comparisons, solve problems, and analyze a host of variables in relation to one another for human operators to process. Advanced algorithms can sift through limitless volumes of data and find key objects of combat relevance in milliseconds, easing the cognitive burden and time constraints placed on human operators.

“We’re applying these different technologies, either to what the Army calls enduring fleets that are going to be around a while, like the Abrams in the Stryker, and to emerging requirements such as robotics, and air defense that we know the army is really focused on right now and is about to begin to make formal programs,” Keith Barclay, director for U.S. strategy and growth at GDLS, told The National Interest in an interview. “The reason we bring all these technologies together is we want to get feedback from the Army about what they see that is most promising or useful, relevant, etc, and the opposite, to help us understand where to focus our R&D efforts going forward, and help us figure out what technologies we should be bringing in from outside companies,”

In many cases, setting the conditions for continued modernization through common protocols, IP standards, and interfaces is a key focus of GDLS as it seeks to anticipate and respond to Army requirements. For instance, the GDLS approach to active protection systems (APS) is based on engineering an open system able to function as an integrated part of a vehicle as opposed to being a “bolt-on” system. The effectors and technology being used for its APS, for example, can vary depending on tactical requirements and integrate cutting-edge non-kinetic defenses such as electronic warfare or high-powered microwaves.

GDLS director of U.S. business development Tim Reese explained to The National Interest that APS technology can use both EW and a high-powered microwave.

“It’s a soft kill system that doesn’t have a kinetic defeat. So it’s limited only by the amount of fuel that you have on the vehicle, it runs off of electrical power. The other unique thing about it is that it can defeat swarms of drones. It’s not just for singular point target engagements, although it can do that. But it can also steer the beam of microwaves to a larger area and any drone which is inside that beam will be affected in the same way,” Reese said. These kinds of jammers and interceptors could derail an attacking fleet of enemy kamikaze drones.

Commonality across platforms is another way to drive innovation, streamline sustainment and maintenance, improve the logistical supply chain, and ensure performance reliability. This is one of the key reasons GDLS developers looked across a range of platforms and technologies to build-in continued upgradeability and reliability.

“Three of the four vehicles have some things in common … and they’re the AbramsX, the StrykerX, and the TRX. Notice the commonality there. And that is, they’re all powered by hybrid electric engines, which is kind of unique,” Barclay said.