Is the Army Ready to Fight Behind Enemy Lines in Europe? 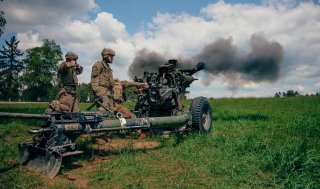 Thousands of U.S. and NATO soldiers are training for offensive airborne attack and seizure operations to ensure they are prepared in the event that they need to defend Eastern Europe. According to the Pentagon, around 4,400 participants from Albania, Belgium, Bulgaria, Georgia, Hungary, Italy, Kosovo, Lithuania, North Macedonia, Romania, Slovakia, Turkey, and the United Kingdom are participating in the Saber Junction 22 exercise, which is being held in Germany and will run until September 20. The U.S. Army explains that the exercise aims to assess “the readiness of European-based units, like the 173rd Airborne Brigade ‘Sky Soldiers,’ to execute unified land operations in a joint, combined environment with participating Allied and partner nations.” The Army’s 173rd Airborne Brigade practiced key aspects of air-land attack preparations, including by air-dropping an M119A3 howitzer and a tactical vehicle from a C-130 cargo plane.

It is not surprising that allies located near Russia are preparing for forward-positioned offensive operations, which would be key to any possible engagement with the Russian military. For instance, in a conflict between NATO and Russia, such maneuvers could even be necessary to take control of areas near or within Russia. Being able to use cargo planes to drop supplies, weapons, and assault forces behind enemy lines would be critical in any sustained offensive operation. In particular, a force capable of airdropping artillery platforms and tactical vehicles behind enemy lines or over uneven terrain can maneuver in ways that pose serious challenges to hostile forces.

Networking and interoperability across allied militaries are key elements of large-scale exercises like Saber Junction 22. “Participants work through realistic scenarios together in a live maneuver space, building relationships across borders that could be called into action in a crisis,” a U.S. Army article on the exercise explained. If forces from such a wide range of countries can effectively share information across domains in real-time, the alliance’s operational effectiveness will be greatly enhanced in combat, allowing NATO to expand air and ground connectivity over large areas with dispersed, networked missions. Col. Tim Shaffer, officer in charge of training for the Southern European Task Force, Africa, highlighted the importance of enhancing interoperability, saying, “We can never get enough opportunity [to] work with our NATO allies and partners.”