U.S. HIMARS and Drones Are Pummeling Russia in Ukraine 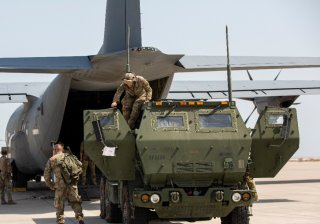 The Pentagon has announced a new military aid package for Ukraine as Russia’s invasion grinds into its sixth month.

The package contains four additional High Mobility Artillery Rocket Systems (HIMARS), giving Ukraine a total of sixteen such units. Ukraine will also receive several new vehicles, anti-armor weapons, and 36,000 rounds of 105mm ammunition. "This is ammunition that is actually going to support a donation that the United Kingdom is making of Howitzers, and this is something that we do quite frequently where we match countries that maybe have one part of a capability with another donor country to create a complete capability for the Ukrainians," a senior defense official said, according to the statement. The aid includes a commitment by the Defense Department to deliver as many as 580 additional Phoenix Ghost kamikaze drones to Ukraine.

Kyiv says it has used the U.S.-supplied HIMARS to successfully strike critical Russian assets and infrastructure in Ukraine. Ukrainian forces recently employed HIMARS to pummel Antonivskyi Mist, a key bridge connecting the occupied Kherson region with Crimea. The attack only caused partial damage to the bridge, however, with local Russian troops reportedly managing to intercept most of the missiles.

The Russian Defense Ministry said last week that its forces took out four U.S.-supplied HIMARS launchers, a claim denied by Washington and Kyiv. The Russian military alleged in a follow-up statement on Sunday that it destroyed over 100 HIMARS missiles in central Ukraine’s Dnipropetrovsk region.

The Pentagon read-out assessed that Russian morale in Ukraine is slowly wavering. "We continue to see increased signs of discipline and morale problems in the Russian army. The Ukrainian will continues to be incredibly strong. And what we're seeing is that will kind of … push the Russians around pretty decently,” the statement read, citing a military official.

Defense Secretary Lloyd Austin said during a press conference last week that U.S. security assistance to Ukraine “is making a real difference in real time,” adding that “the Ukrainians are making the Russians pay for every inch of territory that they gain.”