The Army Is Sending Robotic Combat Vehicles to War 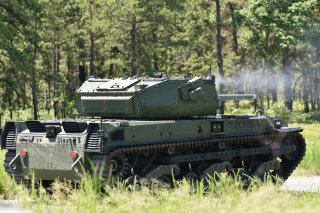 The U.S. Army is looking to use robots in future conflicts by placing them directly in the hands of soldiers during specific tactical situations.

The Army’s Robotic Combat Vehicles, light, medium, and heavy, are emerging as prototype weapons platforms to be further developed for operational use. A key part of the Army’s development of new technologies involves testing them during combat circumstances to see how they operate.

“You’re going to put a robotic combat vehicle in a formation, and we think we know how you’re going to use it. But we’re not right. Ultimately, the soldiers are going to help shape how it’s used. That’s really what AFC [Army Futures Command] is pushing for, to get technology in the dirt and allow soldiers to write those requirements, not come up with some exquisite end-state threshold objective, and then fifteen years from now we’re going to achieve it. How do we iterate the requirements process as quickly as we can iterate software,” Kevin Mills, deputy executive director, Ground Vehicle Intelligent Systems, Army Ground Vehicle Systems Center, told The National Interest in an interview. “By giving us, you know, honest feedback, they [the soldiers] definitely didn’t hold back when things didn’t work, or what they wanted to see improve. I think that’s really the whole point of doing this is getting that feedback that allows me to go back to my engineers and say, okay, these are the things we have to fix.”

The development process, Mills explained, is intended to be incremental and progressive, involving ongoing collaboration between engineers and soldiers analyzing how new systems can best be used during combat. There is a complex and extremely critical synergy between the emergence of new technologies and evolving concepts of combined arms maneuver, and exercises like the one at Fort Hood are designed to explore that intersection.

“It’s really a chicken and egg thing because you’re giving soldiers a new capability. And the worst thing you could probably do is say, ‘Hey, fight the exact same way with this new technology.’ AFC is really pushing for us to get technology in soldiers’ hands and let them innovate on the tactics and operations,” Mills said.