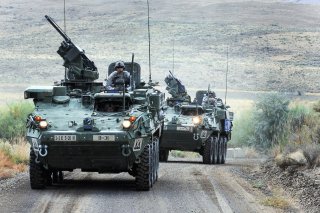 Indeed, advanced algorithms able to operate an entire convoy of ten or more driverless vehicles are changing the tactical landscape and helping the Army improve and expand its ground maneuver operations. If soldiers traveling in a convoy do not have to focus exclusively on driving but are instead transported by advanced autonomous navigation systems built into vehicles, their capacity and proficiency to perform a wider range of missions with greater effectiveness increases to unprecedented levels. An unmanned convoy, for instance, has fewer security requirements, meaning it can operate in hostile areas with fewer risks.

“Right now, how we do it in the operational Army is you have to pull from combat units to support the logistic convoys, which really decreases your readiness and pulls folks away from combat missions. As they're forced to run convoy security. If we free up that driving function, now, the logistic units can provide their own security,” Kevin Mills, deputy executive director for Ground Vehicle Intelligent Systems at the Army Ground Vehicle Systems Center, told The National Interest in an interview.

Now that autonomy has achieved landmark breakthroughs, where will it go from here? Beyond security benefits, one paradigm-changing innovation is that vehicles can be programmed to identify system breakdowns well in advance of an actual failure. Army weapons developers are now developing ways to “map out” avenues for how new, advanced algorithms can perform a wider range of functions beyond navigation.

“We are working on understanding how, when a vehicle breaks down, and it's unmanned, what do you do? Those are the sorts of ConOps [concepts of operations] and TTPs [tactics, techniques, and procedures] that we're learning right now with soldiers, and that's going to enable us to get these systems in the field,” Mills said.

An unmanned or autonomous convoy could, for example, be programmed to respond to specific terrain features, identify and follow certain critical patterns, or respond to unanticipated warfare developments.

“I think we also get the opportunity now to start adding more tactical elements, so the vehicle isn't just moving from point A to point B, but it's mimicking what a soldier would do—making sure to follow a tree line or not to crest over a hill. Maneuver tactics, which are so essential for warfare, are something that you could program into the machine and we'll see those moving forward as the next level of just getting from point A to point B successfully,” Mills said.