Army Will Soon Conduct a 'Wargame'. And Losing Is "Seen as a Great Development" 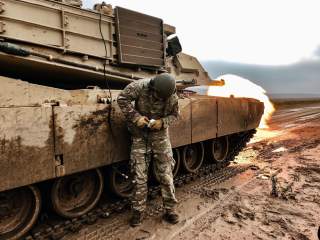 “We are going to be doing table top wargames to see what kinds of things we will need in our platforms to counter threats,” Maj. Gen. Cummings, Program Executive Officer, Ground Combat Systems, told Warrior in an interview.

Wargames, according to senior Army officials who take part in them, pit friendly “blue” teams against “red” teams acting like major adversaries. The exercise can involve maps, intelligence data, terrain and geographic factors as well as specifics regarding whatever populations or countries are involved. They are often literally on a table top with nearby computers, simulations and methods of data analysis, or in some cases they can be as large as moving structures on the floor of a gymnasium.

“Through a series of structured questions, you have leaders make decisions. In a table top you get reactions. You may even have players that act like a local population. You put it in context of geopolitical and tactical circumstance,” a senior Army official told Warrior in an interview.

By emphasizing that these wargames would be designed to identify enemy threats, Cummings pointed to the importance of capturing, replicating or precisely mirroring the weapons, tactics, strategies and force structure of specific high-tech enemies.

While never exact, these kinds of wargames strive to closely approximate specific weapons systems, armored vehicles, missiles and drones a particular enemy force would have.

What would it look like if a “red” force took on the role of the Russian Army and launched a massive air-ground invasion of the Baltics or other areas of Eastern Europe? The blue team would consist of Combatant Commanders making decisions in response, while taking Russian tanks, missiles, drones and weapons into account.

A Rand Corporation Wargame took up this question several years ago. The exercise found that Russian forces would quickly overwhelm NATO resistance in the Baltics. The finding of this study wound up being a decisive factor in a US Army decision to send more troops to the region.

“How many combat vehicles does an enemy have? Or let’s say an enemy has a bullet that goes 1000 miles - let’s wargame what that means,” the official said. “Just because their weapons may be able to shoot a certain range, that does not mean they can hit a target. What kinds of sensors do they have? What kind of network? “

Unlike computer simulations which rely upon generated images, analysis and scenarios able to mirror the details of a given attack scenario or enemy weapons systems, wargames are designed to test an ability to respond to specific actions and attacks made by a “red” force playing the enemy role

“Wargames include evidence based analytics. Eventually you have to apply experience. You cannot simply opine around a table,” the senior Army official explained.

For example, how should an Army respond if the enemy closes off a port, cuts of supply lines or uses air assets to destroy long range weapons? The amount of equipment, details about weapons capability and the exact configuration of an enemy force is replicated by the wargame.

“One model is based upon enemy capabilities and the other on enemy intentions,” the essay, titled “The Manual Wargaming Process: Does Our Current Method Give Us The Optimum Solution?”

Battle damage assessments are of great significance in wargames. For instance, what happens if large portions of a force are wiped out by an attacking enemy? What kinds of options does that leave a commander?

The wargames are designed to encompass the full range of cultural, economic and geographical factors. For instance, some wargames take place in the arctic, whereas others are in the desert.

“After certain battles in Desert Storm, we built a wargame on it. We used their actual tanks against our tanks,” the official said.

Interestingly, losing a wargame is seen as a great development.

“If the red team outdoes you or comes up with something you are not prepared for, I would call that a successful wargame because you want a world-class adversary. In this case you learn something you did not know” the senior Army official said.