The Army's Project Convergence is Building an AI-Powered 'Kill Web' 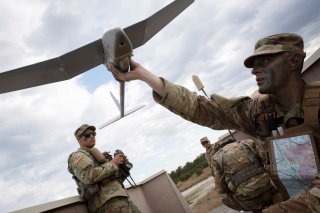 Drones, helicopters, aircraft, rocket launchers, and armored ground vehicles can now all find and destroy enemy targets in a matter of seconds, a development that will shape the future of warfare.

The U.S. Army’s emerging ability to dramatically shorten “sensor-to-shooter” time in warfare situations was demonstrated at recent Project Convergence exercises. This technological breakthrough will enable forward operating mini-drones to network with larger unmanned systems. In addition, it will allow helicopters and ground weapons to find, analyze, and destroy targets in real-time across multiple domains. Drawing upon an artificial intelligence system known as FireStorm, multiple networked Army platforms can now gather and analyze massive amounts of incoming data. FireStorm gathers streams of data and identifies what is relevant in order to provide targeting information and recommend the optimal weapon or method of attack.

This high-speed process, which gives humans life-saving data in seconds, has brought one of the Army’s dreams into fruition. The intent is to get inside of an adversary’s decision cycle in order to act in advance of an incoming attack. This complex system can be thought of as a land-based iteration of a now-famous process for fighter pilots. The OODA loop, which stands for observation, orientation, decision, and action, is a series of steps that can help a fighter pilot win a dogfight. Generally, the fighter pilot who completes the OODA loop faster is the one who makes it out of the dogfight alive.

Project Convergence adapted this conceptual paradigm and is now applying it to multi-domain war with great success. Initial progress with this breakthrough technology represents the culmination of decades of efforts to enable cross-force networked connectivity across multiple nodes. A “system-of-systems” interoperable network, after all, formed the inspirational foundation for the Army’s Future Combat System effort decades ago. Now, common technical standards, artificial intelligence computing, and refined concepts of operation have brought this to life in a way that may reshape modern warfare.

Should the Army’s Air Launched Effects mini-drone succeed in gathering and transmitting time-sensitive targeting information, an armored vehicle, dismounted infantry unit, or drone could strike within seconds. This concept, as described to the National Interest by Army Vice Chief of Staff Gen. Joseph Martin, is not merely envisioned as a “kill-chain.” Instead, the Army hopes to develop an integrated “kill web” in which multiple meshed nodes close in on, identify, and eliminate targets.