Artificial Intelligence Is Strengthening the U.S. Navy From Within 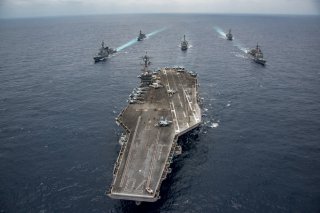 Previously segmented data streams on ships, drones, aircraft, and even submarines are now increasingly able to share organized data in real-time, in large measure due to breakthrough advances in AI and machine learning. AI can, for instance, enable command and control systems to identify moments of operational relevance from among hours or days or surveillance data in milliseconds, something which saves time, maximizes efficiency, and performs time-consuming procedural tasks autonomously at an exponentially faster speed.

“Multiple data bytes of information will be passed around on the networks here in the near future. So as we think about big data, and how do we handle all that data and turn it into information without getting overloaded, this will be a key part of AI, then we're talking about handling decentralized systems,” Nathan Husted of the Naval Surface Warfare Center, Carderock told an audience at the 2022 Sea Air Space Symposium. “ ..and of course, AI plays a big part in the management in between the messaging and operation and organization of these decentralized systems.”

AI’s success could be described paradoxically: in one sense, its utility or value is only as effective as the size and quality of its ever-expanding database. Yet by contrast, its conclusions, findings, or “answers” are very small and precise. Perhaps only two seconds of drone video identify the sought-after enemy target, yet surveillance cameras have hours if not days of data. AI can reduce the procedural burden placed upon humans and massively expedite the decisionmaking process.

“If we look at the battlespace, we are actually training for the future. As we look at AI in the battlespace … we've got big data and AI systems. So we're going to have this extremely complicated, information-rich combat environment,” Husted said…

Navy industry partners also see AI as an evolving technology that will progressively integrate into more ship systems, command and control, and weapons over time as processing speeds increase and new algorithms increase their reliability by honing their ability to assimilate new or unrecognized incoming data. This building block approach, for example, has been adopted by Northrop Grumman in its development of a new ship-integrated energy management, distribution, and storage technology called Integrated Power and Energy Systems (IPES). For instance, Northrop Grumman’s solution is built to accommodate new computing applications as they become available, such as AI-generated power optimization and electric plant controls.

The technology seeks to organize and store energy sources to optimize distribution across a sphere of otherwise separated ship assets such as lasers, sensors, command and control, radar, or weapons. AI-enabled computing can help organize incoming metrics and sensor data from disparate ship systems to optimize storage and streamline distribution as needed from a single source depending upon need.

“AI is an emerging capability that shows promise in some of these more complex electrical architectures to manage in near real-time. Future capability that would rely upon AI and be more computationally intensive is likely to happen in some aspects of electric plant controls,” Matthew Superczynski, chief engineer for Northrop Grumman’s Power/Control Systems, told The National Interest in an interview.  “We are building upon the architecture the Navy already has to give them more capability and lower risk. We can build on top of that.”