Artillery Duel: Who Will Win the Russian-Ukrainian War for the Donbas? 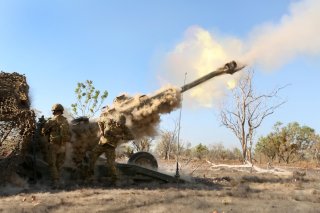 The Pentagon describes the current war in Ukraine as an “artillery duel” in which each side is firing stand-off projectiles at ranges out to 30km or more. Russian weapons such as rockets and missiles are able to travel hundreds of miles, but 155mm Howitzer cannons now possessed by Ukraine can fire as far as 30km, meaning Russian forces are now more vulnerable than they were previously.

Russia is making some uneven and insecure gains, yet the Pentagon effort to send large amounts of artillery is described as a specific response to what Ukrainian forces most need in the current fight.

“In the last several days, the Russians have made some incremental progress in and around the Donbas. They have not had a decisive breakthrough. And the Ukrainians are putting up a heck of a fight,” Dr. Colin Kahl, under secretary of defense for policy, told reporters, according to a Pentagon transcript.

Kahl explained the artillery duel in the context of a newly approved $700 million U.S. aid package to Ukraine which includes counter artillery radar, drones, mechanized vehicles and, for the first time, GPS-targeted Guided Multiple Launch Rocket Systems able to destroy targets with precision out to 70km.

Unlike the defense of Kyiv, which benefited greatly from closer-in anti-armor weapons such as a Stinger or Javelin which can fire out to several miles, fighting in Donbas and eastern Ukraine is flatter, more open terrain less hospitable to ambushes and hit-and-run attacks with anti-armor weapons.

At the same time, there are many urban areas in the Donbas region and it remains to be seen how successful Russian forces will be in entering the cities. Closer-in urban fighting might greatly benefit the Ukrainians, which is one reason why the aid package includes 1,000 additional Javelins and 6,000 anti-armor weapons. Heavier forces are likely to be quite vulnerable in close-quarter-battle where buildings, hills, and uneven terrain can be used for surprise ambushes and hit-and-run attacks. Heavy armor such as tanks, infantry carriers and even some tactical vehicles will be extremely vulnerable passing through narrow passageways, intersections, or other areas where they would be subject to being fired upon from hidden locations.

It will also be difficult for Russian forces to “hold” territory they may seize given that occupying forces are likely to be subject to anti-armor or anti-personnel strikes from the Ukrainians.