Inside the Army’s Mission to Build Course-Correcting Artillery 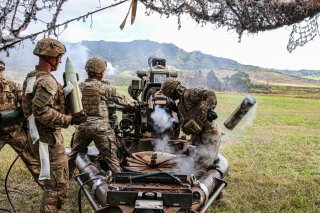 For years, enemy armored vehicles, troop formations, and weapons systems have been deliberately hidden for the specific purpose of eluding U.S. Army precision-guided weapons such as GPS-guided Excalibur artillery rounds.

A proven success since it was first used in Iraq in 2007, Excalibur has been used to pinpoint enemy targets to within one meter from thirty kilometers away, something that changed the paradigm for ground warfare. Enemies have now learned of this capability and have taken decided measures to counter precision strikes. Hiding in areas obscured by terrain can make it extremely difficult for Excalibur rounds to attack and destroy certain enemy targets, as the GPS-guided rounds typically follow a parabola-like trajectory and descend upon fixed targets.

Now, the Army is changing this in an accelerated fashion through the development of a new, cutting-edge 155-millimeter artillery round called the shaped trajectory, a projectile capable of adjusting course in flight and changing directions as needed to destroy otherwise obscured or unreachable targets.

“We want to get to the point where we have target-seeking munitions. Counterintuitively, it lowers the cost-per-kill. These will be expensive munitions, but when you have the confidence that it's going to seek and destroy the target you’re shooting at, it certainly lowers the number of munitions you have to shoot at it,”  Maj. Gen. John Rafferty, director of the Long Range Precision Fires Cross-Functional Team at Army Futures Command, told the National Interest in an interview.

Course correcting munitions can also massively increase the speed of attack, as a target can be hit faster and with precision without forces needed to bombard or overwhelm an area with artillery fire.

“It helps shrink the sensor-to-shooter timeline. You need a certain level of fidelity. You need to know that the target is what you think it is. You may not have to have all the specifics that add extra time for analysts. We can close the sensor to shooter loop in a much more timely fashion which is so important, but these targets often require munitions that can course correct,” Rafferty said.

Instead of being limited or confined to a standard guided-round trajectory, which descends in a direct and known fashion, the “shaped trajectory” round can be pre-programmed by an observer to perform a “high-G-U-turn,” altering its course to destroy obscured or hidden targets, developers explained to the National Interest.

“The projectile itself has fins and canards that enable it to steer,” Rafferty said.

Therefore, should a drone beyond the range of enemy ground fire use high-fidelity cameras to find a hidden target, a datalink can send the real-time video to maneuvering, ground-based command and control with mechanized units in position to fire a “shaped trajectory” course-correcting round to destroy the target. This not only shortens the sensor-to-shooter time but also greatly improves survivability by enabling stand-off range precision attacks beyond the line of sight.

The Army is already using some of its “shaped trajectory” Excalibur rounds as part of an ongoing process to explore and further develop a family of advanced 155mm artillery rounds designed to extend range, change course in flight to hit hidden targets, attack moving targets, and tailor blast effects to destroy enemy armor.

Rafferty explained that as part of this broad effort, the Army is also developing an enhanced lethality version of Excalibur called “Hit-to-Kill,” which will have a target-seeking sensor and use maneuverability to course correct and steer towards the target to destroy it.