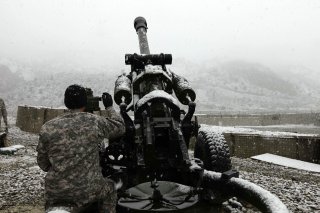 The United States Army is Training Ukrainian Artillerymen on American Howitzers in Germany. The expedited training provides Ukrainians with the basics to get them back to Ukraine as soon as possible. American servicemembers are training members of the Ukrainian military on American M777 weapon systems in Germany, the Pentagon’s press secretary, John F. Kirby, explained to reporters yesterday. Press Secretary Kirby added that “these efforts build on the initial artillery training that Ukraine's forces already have received elsewhere and also includes training on radar systems and armored vehicles that have been recently announced as part of security assistance packages." Kirby also added that the Army organizes the training in Germany in Europe and Africa. More specifically, “Florida National Guardsmen — who were part of the Joint Multinational Training Group in Western Ukraine and were ordered out of the country as the threat of the Russian invasion intensified — have reunited with Ukrainians in Germany and are again working to give the Ukrainians the knowledge they need to defend their country.” "The recent reunion of these Florida National Guard members with their Ukrainian colleagues, we are told, was an emotional meeting, given the strong bonds that were formed as they were living and working together before temporarily parting ways in February," Kirby explained.

The M777 is an American 155mm towed howitzer that is arguably among the best of its class in the world. Thanks to the extensive use of titanium in the howitzer’s construction, it is about 6,700 pounds lighter than the M198, its predecessor.

The United States has donated about ninety M777 field pieces to Ukraine, with about 180,000, 155mm artillery rounds. Ukraine has also received additional donations from both Australia and the United Kingdom.

Secretary Kirby explained that the United States recognizes the Ukrainians are already at war and that Ukrainian military personnel training on the M777 do not have time for extensive, full-length training classes.

“As such, the Ukraine military chose artillery personnel to learn to operate the M-777 howitzer,” Kirby explained. “They have the background needed to operate artillery and just need to learn the peculiarities of the American system."

Training is much the same for Ukrainian radar operators too. “While they will receive American systems, these soldiers have already learned about radar and just need to learn what buttons to push, or what pulses mean on American sets,” Kirby said. “These Ukrainians soldiers will then go back to Ukraine and teach their fellow soldiers how to use the equipment effectively.”

Time is of the essence, Kirby added. "As you might imagine, these soldiers are eager to learn these new skills, but they're also eager to apply those new skills in the conflict."