The Atomic Bombings of Japan Did Not Produce its Surrender 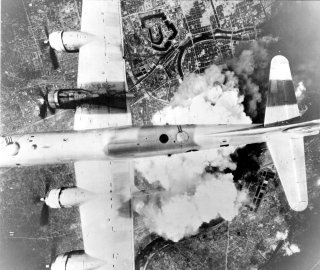 This week, we commemorate the seventy-eighth anniversary of the U.S. atomic bombings of Hiroshima and Nagasaki, which killed an estimated 140,000 civilians just before the end of World War II. Tragically, twelve courageous U.S. airmen being held as prisoners of war in Hiroshima also perished in the bombings. President Joe Biden has condemned Russian president Vladimir Putin as a war criminal guilty of genocide for the deaths of over 5,000 civilians in his continuing illegal war of aggression in Ukraine. However, few have decried President Harry Truman as a war criminal for killing twenty-eight times more civilians in the atomic bombings of Hiroshima and Nagasaki, not to mention President Franklin Delano Roosevelt’s (FDR) and Truman’s fire bombings of sixty of Japan’s other largest cities.

One of the greatest popular myths of World War II is that Truman had no choice but to drop the atomic bombs on Japan since the Japanese were willing to fight to the last man, and that dropping the atomic bombs saved the lives of one million U.S. soldiers who would have died in an invasion of the Japanese home islands. In fact, the U.S. Army estimated at the time that only 44,000 troops would have died in a full-scale invasion of Japan. However, the stark truth is that the U.S. atomic bombings of Japan did not save the lives of any U.S. military service members as Japan had been attempting to surrender for several months prior to the atomic bombings. Following the U.S. capture of Marianas Island and the commencement of the B-29 firebombing campaign against Japan’s largest cities in July 1944, Emperor Hirohito ordered the Japanese government to negotiate Japan’s surrender in the belief that his refusal to do so would result in the United States exterminating the Japanese.

General Douglas MacArthur compiled five separate high-level Japanese surrender overtures—offering virtually identical surrender terms as we imposed on them seven months later—and sent them to FDR in January 1945 just before the Yalta Conference in a forty-page memorandum. Sadly, FDR refused, remarking, “MacArthur is our greatest general but a poor politician.” It is unclear what exactly FDR’s rationale was—given that an acceptance of Japan’s surrender in January 1945 would have been greeted with great relief by the war-weary U.S. electorate—but some have speculated it may have been a reference to his desire to prolong the war sufficiently to allow the Soviets to intervene in the Pacific War so they could share in the territorial spoils.

The existence of the MacArthur Memorandum was first revealed by reporter Walter Trohan on the front pages of The Chicago Tribune and Washington Times-Herald four days after the Japanese surrendered on August 15. He had been forced to withhold it for seven months due to wartime censorship. It was leaked to him by FDR’s chief of staff, Fleet Admiral William Leahy, who feared it would be classified top secret for decades or even destroyed. Its authenticity was never questioned by the Truman administration. According to former President Herbert Hoover in his memoir, Freedom Betrayed—Herbert Hoover’s Secret History of the Second World War and its Aftermath,  its veracity was confirmed in every detail by General MacArthur himself. It was also confirmed in the book How the Far East Was Lost by Anthony Kubek. Aside from a few other conservative sources at the time, its existence has largely been erased from this history books by the liberal establishment which sought to cover up such inconvenient truths about a conflict which it has long misrepresented as “the Good War.” This, despite the fact that World War II was the most terrible and deadly war in human history, costing the lives of seventy million people. Further, rather than destroying tyranny, the war served to greatly expand Communist tyranny to one-third of the world’s territory and people—from 170 million in 1939 to 730 million a mere decade later.

Needless to say, had FDR accepted Japan’s surrender at that time, not only would he have saved the lives of tens of thousands of U.S. soldiers, airmen, and sailors who died unnecessarily, but Communist China and North Korea would not exist today due to the fact that Mao Zedong’s Red Army would not have had the sanctuary of Soviet-occupied Manchuria to fall back to rest, refit, and rearm with captured Japanese weapons. Instead, Chiang Kai Shek’s National Revolutionary Army would likely have defeated them in 1946, bringing all of China under its control. This would have saved up to 100 million lives lost to Communist mass murder and wars, not including over half a billion forced Chinese abortions and infanticides. It also would have saved the lives of nearly 100,000 U.S. soldiers who lost their lives in the Korean and Vietnam Wars.

General MacArthur was a visionary anti-Communist leader who supported the cause of international peace and freedom. The Japanese continue to revere him, due to the fact that he had successfully argued against the postwar division of Japan into Soviet-occupied north, including the main Japanese island of Hokkaido and part of Honshu—which was Japan’s largest island—and a U.S.-occupied south. He also convinced Truman not to prosecute Emperor Hirohito as a war criminal, arguing that he was like a deity to the Japanese, while also saving Japan from the dire and apocalyptic fate of postwar Germany.

MacArthur instead opted to immediately begin to administer humanitarian relief to the defeated Japanese and to restore their economic prosperity in accordance with U.S. plans for postwar Germany previous to the signing of the Soviet-inspired Morgenthau Plan. While Germany was denied a peace treaty and was not granted full sovereignty over its nation until the Two Plus Four Agreement on German Reunification was signed in 1990, Japan had its full sovereignty restored in 1952 with the signing of the Treaty of San Francisco, formally ending the war, and the U.S.-Japan Security Treaty aimed at defending Japan against Soviet aggression. MacArthur was later fired in 1951 by President Truman for wanting to win the Korean War and liberate not just all of Korea but mainland China from Communism as well.

While America’s school textbooks claim the atomic bombings ended the war in the Pacific, according to the plaque on its atomic bomb exhibit, the National Museum of the U.S. Navy in Washington, DC, “The vast destruction wreaked by the bombings of Hiroshima and Nagasaki and the loss of 135,000 people made little impact on the Japanese military. However, the Soviet invasion of Manchuria … changed their minds.” The Soviet Union had declared war on Imperial Japan on August 8. Ultimately, Japanese leaders decided to surrender unconditionally to the United States on August 15 following the Soviet’s lightning-fast “August Storm” victory in Manchuria. The Japanese feared that the war’s continuation would result in their suffering the same fate as Germany, which had been carved up and dismembered with half of their country Sovietized, their citizens starved to death, and millions of their women raped. They also feared that Emperor Hirohito would be deposed and executed by the Soviets.

On August 13, Prime Minister Kantaro Suzuki explained that Japan had to surrender quickly because “the Soviet Union will take not only Manchuria, Korea, Karafuto (southern Sakhalin Island), but also Hokkaido. This would destroy the foundation of Japan. We must end the war when we can deal with the United States.” Japanese leaders were wise to do so, as unbeknownst to them, Stalin had ordered the amphibious invasion of Hokkaido to begin on August 24 with two and a half Red Army divisions using amphibious assault landing ships that had been provided by the U.S. Lend-Lease Act.

In 1945, seven of the United States’ eight five-star Army and Navy officers—Generals Dwight Eisenhower, Douglas MacArthur, and Henry “Hap” Arnold, and Admirals William Leahy, Chester Nimitz, Ernest King, and William Halsey—agreed that Japan would have surrendered unconditionally by November even if the United States declined to employ its atomic bombs or even invaded the Japanese home islands. Yet even if the atomic bombings had, in fact, compelled the Japanese to surrender, the atomic and fire bombings of Japanese cities, which killed an estimated one million Japanese civilians, would have constituted egregious war crimes under the draft rules of aerial warfare which the United States had supported before the war as well as current international law, which prohibits the deliberate mass killing of non-combatant civilians.

Tragically, nearly eight decades after the atomic bombings of the Japanese cities of Hiroshima and Nagasaki, the United States is now on the verge of nuclear war with Russia over Ukraine and with China over Taiwan. This is due to the fact that U.S. leaders refuse to take the threat of Russian and Chinese nuclear weapons seriously, in the mistaken belief that Russian and Chinese leaders share the Western viewpoint that nuclear wars cannot be fought and won—despite the fact that the U.S. victory over Japan has proven that limited nuclear wars are possible. The Biden administration would do well to heed the lessons of the atomic bombings of Japan and limit its responses to Russian and Chinese aggressions to large-scale trade and economic sanctions while focusing on diplomatic solutions to both conflicts. Averting the outbreak of a Third World War with the Sino-Russian alliance, is the United States’ utmost priority, lest Japan’s fate is repeated upon U.S. cities.