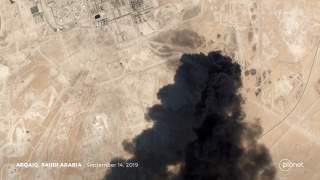 Energy experts and scholars like me have long wondered what the impact would be from a major attack on Saudi Arabia’s oil facilities. For decades, the Saudis were the world’s top exporter and swing producer, able to change output to meet fluctuations in market demand. Would an assault on their oil bring panic and an extreme rise in prices?

Now there is an answer. The recent drone and missile attacks at Abiqaiq, the Saudi’s largest oil processing center, caused the worst sudden supply disruption in history, knocking out nearly 6 million barrels per day, half of the country’s total production and about 5% of global supply.

But not much happened in the aftermath. There’s been renewed rhetorical fire and fury between Iran and the U.S., a plan to deploy U.S. “air and missile defense” troops in Saudi Arabia, and a promised increase in U.S. sanctions. Yet almost no panic in the oil market occurred, no surge in prices and no sign of a stock market collapse.

To understand this, one must look at how dramatically the global oil market has shifted in the past decade, particularly the role of the U.S.

History Not a Guide

We’ve seen the impact oil shocks can have. The Iranian Revolution of 1978-79 took about 5 million barrels per day or 9% of global supply off the market, at a time when oil demand was rising and the Saudis weren’t able to fill the gap. Prices more than doubled and remained high for over a year, raising inflation and bringing a new era of smaller vehicles, energy conservation and lower oil consumption. A decade later, when Iraq’s invasion of Kuwait took out exports from both countries, amounting to 4.3 million barrels per day, or 5% of global supply, the price rise was small and brief. The Saudis had more oil on tap and were able to replace the loss.

This history helps explain why some observers, in the heat of the moment, thought that the attacks on Saudi facilities at Abiqaiq would push prices up 30% or more. World prices did rise to US$69 per barrel the day after the attacks, but quickly fell back to around $64, where they’d been for much of the summer.

Geopolitical tensions certainly didn’t relax. The Trump administration blamed Iran for the attacks and spoke of a possible military strike, despite a claim of responsibility by the Houthis in Yemen. Iran denied responsibility while the Saudi government insisted the country was at fault.

Despite these rattling sabers, the markets have remained relatively calm. One reason may be that the Saudis seem able to divert enough oil from other sources to keep exports at pre-attack levels for a week or more.

Also, photos of the attacked sites reveal a fairly sophisticated, precision-targeted operation and serious but limited damage. Individual buildings were not destroyed, as shown by images of more than a dozen spheroidal structures in which crude is depressurized and explosive gases are recovered. The Abqaiq processing center removes these gases and toxic hydrogen sulfide from crude oil, making it safe for export. The limited nature of the damage helps explain why, according to updates from the Saudi government in Riyadh, significant volumes could be quickly restored.

Though getting back to full production may take more time than the two or three weeks claimed by the Saudis, the notion that the country will desperately struggle to keep up exports and that the oil market will be angst-ridden looks like an exaggeration at best.

The new reality of world oil supply that has recently emerged explains why panic remains unlikely with current conditions. And central to this reality is the radically new role played by the U.S., one that will not wither or weaken anytime soon.

There has also been the lifting of a 40-year ban on oil exports, a policy Congress reversed in 2015. As a result, exports went from near-zero to over 3 million barrels per day by mid-2019, surpassing most countries in the OPEC group. A particularly striking number here is that America’s need for imports of crude oil have fallen from 60% to a mere 8% in a single decade.

Still more, the historical anxiety in the U.S. about “foreign oil” (and overdependence on OPEC) has also been erased. This hasn’t stopped prices from being volatile at times. But it has added a degree of background stability; supply is no longer controlled by autocratic regimes.

If the attacks on Abqaiq had occurred 10 years ago, prices would have shot far higher and not fallen back so quickly. Today, there is enough oil sloshing around in the world for the Saudis even to buy some from their neighbor, Iraq, to maintain their exports, with little effect on prices.

There are no guarantees about the future. If President Trump were to order a military response, and war broke out in the Persian Gulf, serious impacts on the oil market would ensue. And more provocations from Iran are entirely possible.

To date, the global oil market has been tested by this growing conflict and shown to be more resilient than in the past. But there are obviously limits to the “game” being played.