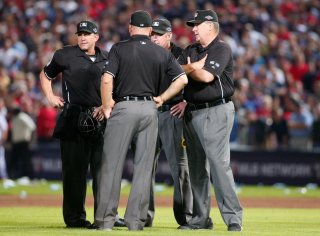 Human umpires have been a part of the game of baseball for as long as the game has existed. But baseball has been testing a concept that would eliminate human error.

Colloquially, the concept revolves around “robot umpires” or “robo-umps.” The idea is not, despite the name, for a literal robot to stand behind home plate and make ball-and-strike calls. Instead, it’s a system known as the “Automated Ball-Strike system.”

It's a computer system that uses cameras to measure whether a pitch is a ball or strike; there is still a human umpire behind home plate who relays the automated calls. The system was tested in different levels of Minor League Baseball for three years before arriving this year for the first time in Triple-A, the highest level of the minors.

Now, there is a timetable for the robo-umpire system to arrive in Major League Baseball (MLB).

MLB commissioner Rob Manfred said this week in an interview with ESPN that the league is eying “some form of robo-umpires,” in 2024. The interview added that on that and other changes, the commissioner “must sell those changes to players and fans, some of whom believe he doesn't have baseball's best interests at heart.”

It all goes to continued questions about the pace of play and lengths of games, as the average baseball game has gotten longer over time.

The interview laid out how the robo-umps system might work.

“In 2024, Manfred says, the automated ball-strike zone system, or as it's commonly called, ‘robot umpires,’ will likely be introduced. One possibility is for the automated system to call every pitch and transmit the balls and strikes to a home plate umpire via an ear piece. Another option is a replay review system of balls and strikes with each manager getting several challenges a game.”

The Associated Press reported in January that the umpires’ union, the Major League Baseball Umpires Association, “agreed in its labor contract that started in 2020 to cooperate and assist if commissioner Rob Manfred decides to use the system at the major league level.”

At least in the short term, it doesn’t appear that a robo-ump regime would make human umpires obsolete or reduce jobs among their ranks. There do not seem to be plans to use a robo-ump system for calls on the base paths or any other function besides balls and strikes.

On a Reddit thread discussing the idea five years ago, one user proposed that home plate umpires wear augmented reality glasses to impose the strike zone in front of him.