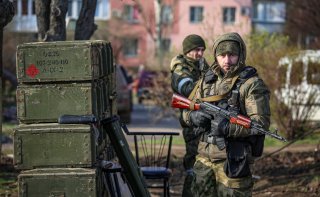 Fighting has again broken out inside the Azovstal plant as Russian forces mount a renewed push to eliminate the last stronghold of Ukrainian resistance inside the southeastern port hub of Mariupol.

"It's been the third day that the enemy has broken through to the territory of Azovstal. Fierce bloody combat is ongoing," said Sviatoslav Palamar, deputy commander of the ultranationalist Azov regiment. "The defenders of the city have been fighting alone for 71 days with the overwhelming forces of the enemy and show such endurance and heroism that the country must know what it means to be loyal to the motherland," Palamar wrote in a Telegram post.

As many as 120 civilians were successfully evacuated from the Azovstal facility on Monday, with just under half reportedly opting to stay in the pro-Russian breakaway Donetsk People’s Republic (DPR).

Palamar accused the Russian side of violating “the promise of a truce” and preventing an agreed-upon evacuation of civilians. Citing Russian military officials familiar with the situation in Mariupol, Russian state news outlet RIA Novosti reported that Azovstal’s defenders sought to swap the civilians for food and medical supplies. These alleged terms were seemingly shot down by the Russian military, which does not want to give the Ukrainian troops the means by which to mount prolonged resistance.

Palamar made an appeal to Ukrainian president Volodymyr Zelenskyy: “I personally appeal to the Supreme Commander-in-Chief to take care of the wounded soldiers who are dying in terrible agony from improper treatment. Give the opportunity to pick up the bodies of soldiers so that Ukrainians can say goodbye to their heroes. Respond appropriately to a critical situation in which the enemy does not adhere to any ethical norms."

The Kremlin, which claims to be in regular contact with the Azovstal garrison, has accused Kyiv of forbidding the plant’s defenders from surrendering to the Russian forces that have been blockading the facility for weeks. Citing the Dunkirk evacuation during World War II as precedent, Azovstal’s commanders have called on world leaders to facilitate an “extraction” of the facility’s fighters to the territory of a third-party state. Moscow continues to insist that the Azovstal garrison’s only option is to surrender directly to the Russian military.

Azovstal has been described as Mariupol’s “last line of defense,” but the plant’s troops—many of whom are reportedly wounded and in dire need of medical treatment—lack the ability to effectively contest the city, which was stormed by Russian and Russian-aligned separatist forces in late March. Ukraine’s southern forces are currently separated from Mariupol by several Russian-held cities, rendering a relief effort impossible.

Russian media has reported that schools and other infrastructure facilities are beginning to reopen in Mariupol under the new Russian-backed DPR administration. DPR head Denis Pushilin, who has visited the city several times in prior weeks, ordered local officials to begin forming a new city council in March.