B-2 Bombers to Hawaii: Why This Should Be China's Nightmare 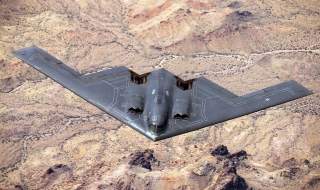 With China rising to become an ever greater threat to American dominance in the Pacific, the United States Air Force has started to rotate its premier long-range strike assets to the region as a counter to Beijing’s increasing belligerence.

Earlier this year, the Air Force deployed three Northrop Grumman B-2A Spirit stealth bombers to Joint Base Pearl Harbor-Hickam in Hawaii in order to demonstrate America’s ability to hold any target on Earth at risk—including deep inside Chinese airspace.

“The B-2 Spirits' first deployment to (Joint Base Pearl Harbor-Hickam) highlights its strategic flexibility to project power from anywhere in the world," Maj. Gen. Stephen Williams, director of air and cyberspace operations, Headquarters Pacific Air Forces said in a statement. "The B-2s conducted routine air operations and integrated capabilities with key regional partners, which helped ensure a free and open Indo-Pacific. The U.S. routinely and visibly demonstrates commitment to our allies and partners through global employment and integration of our military forces."

While in Hawaii from August 15 through September 27, the massive strategic bombers undertook integration exercises with the Hawaii Air National Guard’s 199th Fighter Squadron, which flies the stealthy, high-flying Lockheed Martin F-22A Raptor air superiority fighter. When flying against heavily defended airspace, the Raptors escort the stealthy but comparatively slow and unmaneuverable bombers into enemy airspace. Working together, the Raptors and the B-2 would kick down the door for follow-on aircraft during an actual air campaign. It was exactly this sort of scenario that the B-2s and the F-22s practiced during the bombers’ deployment to Hawaii.

“The training with the Hawaii Air National Guard was invaluable,” Lt. Col. Nicholas Adcock, 393rd Bomber Squadron commander, said.  “Together we refined and exercised multiple tactics that are crucial to the Indo-Pacific Command area of responsibility.”

The Air National Guard also played a key role in operating the B-2 aircraft. Like the 199th Fighter Squadron, which has an active component counter part in the 19th Fighter Squadron with which it shares its F-22 aircraft and personnel, the Bomber Task Force is also what the Air Force calls a Total Force Integration unit—which incorporates both active and reserve component personnel.

“The Bomber Task Force is a total-force integration deployment,” Adcock said. “Our active-duty and guard members worked seamlessly together with their counterparts here in Hawaii to determine the best way for the B-2 to operate from this location in the future.”

The Air Force is likely to increase its deployments of the B-2 and eventually the forthcoming Northrop Grumman B-21 Raider to Pearl Harbor and other bases in the region as China continues to solidify its anti-access/area-denial (A2/AD) strategy. Bases closer to the Chinese mainland such as those in Japan, South Korea and even U.S. territories such as Guam are increasingly vulnerable to Chinese cruise and ballistic missile attacks, thus long-range strike capability becomes evermore important.

But even Hawaii will eventually become vulnerable to attack as China continues to refine its own long-range precision strike capabilities. Indeed, it possible that in the future, the United States might have to rely on long-range strategic bombers such as the B-2, B-21 and B-52—combined with cruise missiles—to effectively strike at China since all of America’s regional bases might eventually become vulnerable to attack.