The B-21 Stealth Bomber Revolution Is Almost Here 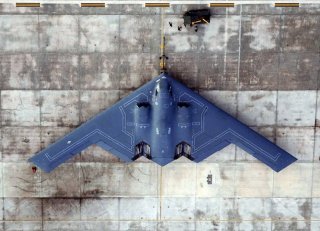 The first flight of the new U.S. Air Force B-21 stealth bomber is now less than two years away, a milestone expected to usher in a new era in stealth technology, avionics, targeting, data management and AI for bomber aircraft.

“The B-21 is intended to stand in and hit heavily defended targets with special-purpose weapons that we can use to strike from a distance or by other means. We know the B-21 will bring unique characteristics with low observability and weapons,”  Gen. Mark E. Weatherington, Commander, Eighth Air Force, and Commander, Joint-Global Strike Operations Center, told The Mitchell Institute for Aerospace Studies in a video interview.

Pilots at Edwards Air Force Base, Calif., are now preparing to conduct the first “flight envelope” and “airframe” test in the coming months, a move which will begin months of Air Force effort to refine, assess and prepare the B-21s technologies for warfare.

While much is often discussed about the expectation that the B-21 will bring new, unprecedented measures of stealth technology, a much lesser-known or discussed element of the platform is its internal technical configuration such as computer processing, electronics, targeting sensors, and AI-enabled data management systems.

Weatherington referred to an “avionics testbed aircraft” as a key step toward preparing a new suite of technologies for bomber flight. While of course many of the details regarding the technology of the B-21 are not available for security reasons, as it is a “black” program in many ways, it is quite reasonable to assume the aircraft will incorporate far more advanced AI systems able to securely share information, process sensor and targeting data and adjust to new intelligence in flight .. at entirely new, potentially paradigm-changing speeds.

Through virtualization and software-hardware synergy, B-21 sensors, computers, and electronics can better scale, deploy and streamline procedural functions such as checking avionics specifics, measuring altitude and speed and integrating otherwise disparate pools sensor information. In effect, it means war-sensitive sensors, targeting and navigational data will be managed and organized through increased computer automation for pilots to make faster and more informed combat decisions.

Speed of targeting and data organizing technology will also help expand the weapons envelope for the new bomber. As Weatherington mentioned, the B-21 is designed to conduct close-in, stealth attacks against enemy air defenses and heavily defended targets, all while remaining undetected. At the same time, the mission scope for the bomber also includes long-range attack and an ability to conduct missions with nuclear weapons, if needed.

“We will continue to develop and refine dual-purpose weapons. This is not new. Bombers carrying cruise conventional and nuclear-capable missiles have been part of our calculus for decades. Stand-off capabilities for our bombers and air-breathing weapons will remain important,” Weatherington said.

The decision to sole-source LRSO development to Raytheon, Weatherington said, helped expedite the development of the weapon and generate the possibility of accelerating its delivery.

“The sole source decision provided an opportunity to accelerate milestones by about a year each. We will look for capabilities to accelerate,” Weatherington said.

With the arrival of the B-21 anticipated in the coming years, many wonder about the pace at which existing B-2s and B-1s will retire. Weatherington explained that the issue is still very much in flux, depending upon the pace at which the B-21s arrive. If the production of the new stealth bomber is not accelerated, then B-2s and B-1s will not retire in large numbers for at least 12 years, Weatherington explained.