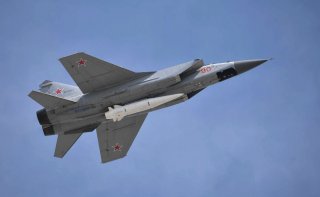 A Russian news report claims the country is “outpacing” rival armies around the world with new weapons, despite a much smaller budget, making somewhat curious and completely unsubstantiated claims.

Citing hypersonic weapons, long-range precision weapons, and armed warships, the TASS report says, "The latest strategic missile systems are on combat alert and the number of strike aircraft with Kinzhal hypersonic missiles as well as warships outfitted with long-range precision weapons is growing. We are also outpacing many advanced armies of the world in developing new armaments with a far smaller defense budget."

This statement is indeed quite curious as the remainder of the story does not mention any further specifics regarding just what kinds of new weapons, armaments are giving Russia this supposed superiority.  Arming Naval warships also seems to be a mysterious comment as Russia’s Navy, while still a threat taken seriously by the Pentagon, is smaller and much less capable than the U.S. Navy. Russia has already claimed to have several operational hypersonic weapons able to fire from strike aircraft. The state of relative maturity of these might not be known, and the United States has its own fast-evolving plan to arm fighter jets with hypersonic missiles. Given the pace at which the United States is progressing with testing, prototyping, and production of hypersonic weapons, Russia may not have any kind of advantage in that area.

As for new armaments, the Russian paper makes a blanket statement with no specifics.

There are a few things that do come to mind when it comes to the question of Russian military superiority, and even they are quite debatable.

All these things considered, there are a few Russian platforms that could arguably be competitive in any assessment of what the world's best weapons systems are. Some have suggested that Russia’s T-14 Armata tank is the most advanced in the world. However, its actual margin of superiority, if there is one, would be very difficult to determine. This is particularly true given the degree of modernization progress with the U.S. Army’s M1 Abrams tank. Numerous innovations have made the M1 an entirely different weapons system than it was when it emerged decades ago.

Another question mark may center around the Su-57, Russia’s reported stealthy 5th-Generation fighter jet. Other than a stealthy-looking exterior that appears to resemble an F-22 with its dual engine configuration, tail wings and blended wing-body, very little actual performance detail may be known about the aircraft. It would seem significant to learn about the range and fidelity of its sensors as well as its weapons applications and computing power.