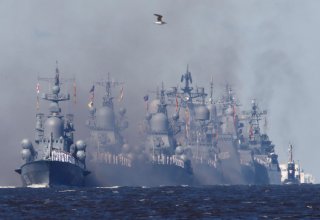 The U.S. and Russian Navies met to establish and further refine safety protocols and specify parameters regarding international navigational zones, maritime interactions, according to a Navy report.

The annual consultations, which are known as the Prevention of Incidents On and Over the Waters Outside the Limits of the Territorial Sea, took place in Moscow on May 25. Established in 1972, the bilateral agreement “codifies” the mutual interest of both sides promoting safe navigation and flight in international waters. Do these meetings ever actually mean anything? Could they reduce tensions? Maybe, but maybe not.

Air-to-air intercepts were a specific part of the discussions, which are pretty much standard procedures. Still, they raise an interesting question as to whether they are just a formality with little or no impact or an actual gesture or demonstration of sincere cooperation. The truth may involve shades of each color. That said, any kind of dialogue regarding security is likely not entirely useless given the number of intercepts, close approaches and points of tension in recent years. In recent weeks and months, in fact, Black Sea operations from both Russian and U.S. Navies seem to be on the uptick, perhaps in response to Russian build-ups on the Ukrainian border.

The U.S. Navy regularly deploys destroyers, U.S. Coast Guard vessels and other surface ships into the Black Sea to demonstrate freedom of navigation, ensure stability and, of course, connect closely with NATO allies bordering the ocean such as Bulgaria and Romania. Some of these Eastern European countries, it could be argued, are potentially quite vulnerable given their proximity to Ukraine, Crimea and the Black Sea.

Furthermore, while the Russian navy might not necessarily present a deep or “blue water” threat to the U.S. Navy in terms of surface firepower, the coastal areas could be more vulnerable given that the Russian navy does operate a large number of smaller patrol boats and corvettes similar to America’s littoral combat ships. These kinds of ships can threaten ports, launch small boat attacks and fire weapons at closer-in ranges. They can also much more easily disrupt or threaten commercial shipping traffic as well.

The Russian navy simply cannot compete with the United States when it comes to destroyers, carriers or other kinds of heavily armed open-water warships. Russia is known to operate only one carrier and a fraction of the destroyers operated by the U.S. Navy. Based upon 2021 assessments available by Globalfirepower.com, the United States operates as many as ninety-two destroyers, compared with Russia’s fifteen destroyers. By contrast, Russia operates eighty-five corvettes, and the United States is listed as only having twenty-one. This is a massive difference which, it could be surmised, might be part of the U.S. Navy rationale for building a large littoral combat ship fleet.

It also does not seem apparent that Russia is now immersed in any kind of large-scale acquisition or modernization of its heavy warship fleet. For example, Unlike China’s new stealth destroyer, Russia does not seem to have a Zumwalt, or even Flight III DDG 51 equivalent, as the country may simply not possess or wish to pursue the ambition of operating a massive Naval force sufficient to project major international power on the ocean. However, that does not mean Russia does not wish to compete and pose serious threats to rivals at sea, as it does possess some heavily armed warships, and the range of modern sensors and weapons can, at least in some instances, compensate for larger numbers of actual warships to a degree. Furthermore, Russia’s naval offensive power, while primarily appearing to be regional in scope, could rely upon smaller, agile, yet still armed lighter warships able to threaten coastal areas or exert control over Eastern European countries in the area.

Russian submarines, however, paint an entirely different picture, as they are considered to be extremely dangerous as well as numerous. Globalfirepower lists Russia as operating as many as sixty-four submarines, roughly comparable to the United States’ sixty-eight submarines.  Unlike its surface fleet, Russia’s undersea force is likely to be global in scope, perhaps in large measure due to the importance of nuclear-armed submarines. Also, a well-armed and capable fleet of submarines does indeed present a deep water threat to the United States, as opposed to Russia’s smaller and less threatening deep water surface force, something which may contribute to the ongoing U.S. Navy effort to massively increase and speed up submarine production.