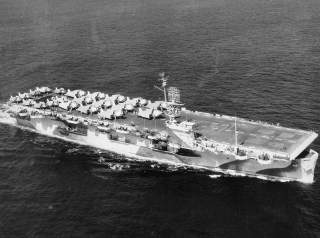 In the pre-dawn glow of October 25, 1944, four tubby TBF Avenger torpedo bombers took off on a routine patrol from the USS St. Lo. She was one of sixteen small escorts carriers in Taskforce 74.4 steaming sixty miles east of Samar island in the Leyte Gulf—protecting the invasion fleet which had landed the 6th Army on Leyte Island to liberate the Philippines after three brutal years of Japanese occupation.

Twenty-two minutes later, the gigantic 18.1” guns of the battleship Yamato opened fire from over nineteen miles away. The 3,300-pound shells straddled the carrier White Plains, a near miss buckling her hull and tripping her circuit breakers. Shells from the other battleships loaded with green, pink and red dye (to assist in ranging) rained down amongst the unarmored flat-tops.

For only the second time in history, enemy battleships had managed to close within gun-range of aircraft carriers. But in the Battle of Samar, nothing went as expected for either side.

In the four-day Battle of Leyte Gulf, the Imperial Japanese Navy deployed most of its remaining capital ships to counterattack the landing in the Philippines—resulting in the largest naval battle in history in terms of sheer tonnage.

Admiral Takeo Kurita’s Central Force included the two largest battleships ever built, the 65,000-ton Yamato and Musashi. However, on October 23, U.S. submarines detected the force and sank two cruisers, including Kurita’s flagship. Then, air strikes from U.S. fleet carriers sank the Musashi on October 24. A shaken Kurita pulled his bloodied fleet out of range.

Assuming the Center Force was dealt with, Admiral William “Bull” Halsey reassigned the fast battleships of Task Force 34 covering the beachhead to assist his 7th Fleet in crushing the Japanese Southern Force in the Battle of Surigao Straits on the night October 24-25.

But Halsey had gambled recklessly. Kurita doubled the Central Force back through the San Bernardino Strait into Leyte Gulf, intending for his capital ships to fall upon the virtually defenseless invasion transports like wolves amongst sheep.

All that stood in Kurita’s way was Task Force 77.4, which was divided into three squadrons named Taffy 1 through 3.

Taffy 3 under Rear Admiral Clifton Sprague was closest to Kurita’s fleet. It consisted of six 7,800-ton Casablanca-class escort carriers mass-produced to defend convoys from aircraft and submarines, freeing larger fleet carriers for heavier combat duties. The “jeep carriers” were crewed by over 900 personnel, typically carried 28 aircraft, and could only attain 20 knots (23 mph) at full steam compared to the 30-33 knots of fleet carriers.

Screening the carriers were three 2,000-ton Fletcher-class destroyers and four smaller 1,370-ton Destroyer Escorts—anti-submarine frigates in modern parlance. Their radar-guided 5” guns were fast-firing and accurate, but lacked the range and penetration to duel cruiser and battleships. Their short-range torpedoes, however, could pose a threat.

Sprague immediately appreciated Taffy 3’s peril: the escort carriers were too slow to outrun the Japanese capital ships, and even if they did escape, that would leave the beachhead exposed. His superior, Admiral Thomas Kinkaid, sent multiple requests for reinforcements to Halsey without reply. Chester Nimitz, commander of the Pacific fleet, chimed in “Where is Task Force 34?”

Intentionally or by coincidence, that message ended with the code hash “The world wonders.” The seeming rebuke so incensed Halsey he did not dispatch Task Force 34 until 11:15 AM, hours too late.

To buy time for his pokey carriers to escape, Sprague had his destroyers lay a thick smoke screen (photo here) while the carriers belted eastward into a sea squall, temporarily obscuring his ships from Japanese gunners.

Nonetheless, the swarming warbirds didn’t hesitate to lob anti-submarine depth charges, strafe armored decks with machineguns, and even buzz overhead with depleted weapons in an effort to draw fire away from the vulnerable escort carriers, before landing at Tacloban on Leyte to reload and refuel.

Kurita, meanwhile, released his ships with a “general attack” order to chase down the carriers —a decision which caused the Japanese formations to blunder into each other’s path.

However, Taffy 3’s eastward course was drawing it further away from hoped-for reinforcements. At 7:30, Sprague reluctantly ordered a hard turn to the south. To prevent Kurita’s ships from heading him off, he instructed the escorts to launch torpedo attacks.

Popping in and out of concealing smoke screens, the destroyers Hoel, Hermann and Johnston, and the destroyer escorts pressed the attack against ships many times their size. The self-sacrificing “charge of the tin-can sailors” is described in a companion article.

The destroyer’s sacrifice bought time, but by 8:30 Japanese cruisers had closed within ten miles of Taffy 3’s trailing ships. The closest carrier, Gambier Bay, was struck by 8” shells from the heavy cruiser Chikuma, then battered by Yamato’s huge turrets. Her engines crippled, the carrier was consumed by fire and capsized around 9 AM—the only U.S. carrier sunk by naval gunfire in combat.

The Casablanca-class carriers were only armed with a single 5” gun in a tail “stinger.” This proved perfectly situated to exchange fire with cruisers and destroyer hot on their stern. Though early carriers often carried heavier gun armaments, Taffy 3’s “pea-shooter”-armed flat-tops of were the only to ever engage enemy surface combatants in a gun duel.

The Kalinin Bay was struck by at least fifteen 8” and 14” shells—several of which penetrated clean through her unarmored hull without detonating. In reply, her 5” battery hit two pursuing cruisers and a destroyer. After missing with shellfire, Japanese destroyers launched a volley of torpedoes, but the Kalinin Bay and an Avenger gunned down three “tin fish” seconds before impact.

St. Lo too managed to score three hits on the charging cruisers while sustaining minor damage in return. 5” shells from the White Plains, assumed to have been disabled early in the battle, detonated a Long Lance torpedo on the deck of heavy cruiser Chokai, knocking out her rudder and engines.

By then, Avengers re-loaded with torpedoes and bombs began swooping back into the fight. One dropped a 500-pound bomb that exploded Chokai’s engine room, setting the cruiser ablaze. She was scuttled shortly afterward.

Aerial bombs also detonated a Long Lance on the deck of the cruiser Suzuya, after she had already lost her rudder to torpedoes. A torpedo from another Avenger slammed into the Chikuma, disabling her port screw and rudder. The crippled cruiser was then struck twice more. Both ships were eventually abandoned.

Even the mighty Yamato was forced to break formation to evade incoming torpedoes. Finally, at 9:20, Kurita signaled to begin withdrawing through the San Bernardino Strait. He misidentified the light ships of Taffy 3 to be full-size fleet carriers and cruisers and feared the 3rd Fleet would arrive momentarily.

Taffy 3’s ordeal was not yet over. At 10:47 land-based Zero fighters laden with 550-pound bombs came barreling towards the escort carriers in the first Kamikaze strike ever attempted. Their leader, 23-year-old Lt. Yukio Seki, had expressed his disapproval of “bleak” Kamikazi tactics to a journalist but insisted he would follow orders.

The carriers’ 40-millimeter flak guns stitched the sky with black puffs of smoke, destroying three Zeroes before they could impact. But Seki smashed his A6M2 into the deck of St. Lo. At first, the carrier seemed likely to weather the new hole in her flight deck but an internal explosion in her hangar full of fuel and bombs tore the ship open, sending her aircraft elevator spinning a thousand feet into the sky (pictured here).

Consumed by gasoline fires and secondary explosions, the St. Lo slipped under the waves thirty minutes later, her surviving crew having abandoned ship.

Taffy 3’s officers and seamen had skillfully strung along Kurita’s faster and more heavily armed ships on a wild goose chase. The escort carriers’ swarming airplanes were more effective at range than the Yamato’s 18” guns, and even the carriers’ “pea-shooters” gave a surprisingly good account of themselves.

But that victory was paid for with extraordinary acts of sacrifice, with two escort carriers, two destroyers and destroyer escort consigned to the deep waters of the Philippine Trench. 1,583 Americans perished, mostly on the destroyers—five times more casualties than incurred in the Battle of Midway. Around 2,000 survivors waited two days for rescue, many succumbing to shark attacks and exposure.