Behold: The Five Greatest Firearms Innovators of the 20th Century 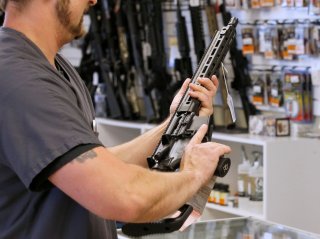 Key Point: Inventors are often forgotten. But let's not forget these ones.

Inventors don't get as much credit as they used to. Sure, it is known that Al Gore invented the Internet—or so he claimed—while Mark Zuckerberg invented Facebook. But unlike the light bulb or airplane, a lot of our modern conveniences aren't remembered for who invented them.

This is especially true in the case of gun designers, who rarely get the credit they deserve in the annals of inventor history, but then again who remembers who invented the radio or TV (that would be Guglielmo Marconi and Philo Taylor Farnsworth respectively). Here is a look at some of the twentieth century's greatest firearms inventors and innovators.

Other than Samuel Colt no American gun designer is perhaps as well known as John Browning, and no other gun designer in the world is credited with so many revolutionary designs. Unlike many of the early pioneers of firearms who were tinkerers, Browning was a firearms designer by trade and he developed not only military and civilian firearms but also cartridges and other gun mechanisms. Simply put, John Browning could be best described as a combination of Leonardo de Vinci, Benjamin Franklin and Thomas Edison all rolled in one.

He developed his first firearm in his father's gun shop when he was thirteen years old, and was awarded the first of his 128 firearm patents by age twenty-four. His designs encompassed handguns and rifles; and this included single-shot, lever-action, pump-action and most significantly auto-loading firearms. During his career he worked for Winchester and Colt among other firearm companies—and for that fact only some of his greatest inventions don't even bear his name.

His designs include the Colt M1911 pistol, the Browning Hi-Power, the M1917 water-cooled machine gun, the M1919 air-cooled machine gun, and the Browning Automatic Rifle (BAR). He also developed a number of cartridges including .25 ACP, .32 ACP, .45 ACP, .50 BMG, and 9mm Browning Long among others. Many of these firearms and cartridges are still in use today; a testament to the quality of his designs.

Even amongst armchair gun "experts" Hugo Schmeisser is too often associated with the German MP-38/40 submachine gun, but in truth Schmeisser only managed the plant where the gun—designed by Heinrich Vollmer—was produced. Yet, Schmeisser's impact on small arms is far more reaching as he is the true father of both the "submachine gun" and the "assault rifle."

Much like John Browning this German designer grew up around firearms, and Hugo was the son of Louis Schmeisser, a noted gun designer who helped with the development and production of Theodor Bergmann's machine guns as well as being the lead designer of the Dreyse 1907 Pistol.

The younger Schmeisser received his training at Bergmann's company and at the end of the First World War designed the MP-18, the first successful submachine gun.

Even before the Second World War broke out, Schmeisser considered a new category of weapon. It began as a short cartridge 7.92mm automatic weapon originally dubbed the Mkb 42 before being designated the MP-43 and later MP-44. Some 10,000 units were manufactured but as the story goes it met with disapproval from Adolf Hitler, who didn't like the idea of the weapon's intermediate round—which was a new concept at the time being larger than the pistol rounds fired by submachine guns but smaller than a rifle round.

In truth, Hitler was opposed to the weapon because German industry couldn't replace the twelve million Kar 98k rifles with the new weapon, but after seeing it in action the German dictator dubbed it the "Sturmgewehr." The select-fire StG44—or "assault rifle, model 1944"—arrived too late to have any impact on the outcome of the war, but the Soviet Red Army certainly took notice of the design. Schmeisser and fifteen other German small arms experts were forced to work with the Soviets until 1952—and it is believed today that he likely influenced the design of the AK-47.

Today's "black guns" market owes a whole lot to a design from more than 100 years ago when General John T. Thompson began working on what would eventually earn the moniker "Tommy Gun." Thompson was a career military officer and during the Spanish-American War served as Chief Ordnance Officer during the Cuban campaign. He was one of the few officers who managed to resolve the logistical problems of that campaign, and after the war his ability to tackle difficult problems was put to good use when he was appointed chief of the Small Arms Division for the Ordnance Department. He supervised the development of the M1903 Springfield rifle and later chaired the board that approved the M1911 pistol.

Thompson retired from the U.S. Army to take a position as chief engineer for the Remington Arms Company, and there he oversaw what was at the time the largest small arms plant in the world. It also allowed Thompson to study weapons design including a delayed-blowback breech system designed by Commander John Blish of the United States Navy. Together the two raised the money to found the Auto-Ordnance Company and began work on a personal machine gun—a concept unlike any other at the time.

When the United States entered World War I in the spring of 1917 Thompson returned to the U.S. Army with the rank of brigadier general and was appointed Direct of Arsenals, where he oversaw all small-arms production for the military. When Thompson retired again he resumed work perfecting his "Trench Broom," which was chambered in .45 ACP. The weapon, known as the "Annihilator," arrived too late for the war—prototypes were on the way to Europe when the Armistice was signed—but the new firearm was released commercially in 1921 as the "Thompson Submachine Gun." Its history with gangsters and then the military in World War II tells the rest of the story.

Mikhail Kalashnikov: Designer of the World's Most Iconic Firearm

The Soviet arms designer didn't invent the assault rifle (see Hugo Schmeisser above), but Mikhail Kalashnikov improved upon the concept. As of 2004 a report on small arms noted that of the estimated 500 million firearms in the world, some 100 million belong to the Kalashnikov family and three-quarters of those are AK-47s.

What makes Kalashnikov's story so amazing is that unlike many of the other men on this list he was—at least according to the official history—a self-taught mechanic and engineer. When he was conscripted into the Red Army his small size led to being assigned as a tank commander. When he was wounded during the Second World War he began designing weapons, and was assigned to the Central Scientific-development Firing Range for Rifle Firearms.

Kalashnikov designed several weapons, including a submachine gun, but when he took elements from the American M1 Garand and the German StG44 he created the gun that would soon become iconic around the world. While the AK-47 is often known simply as a "Kalashnikov," the designer continued to focus on improving upon it with the AKM (Kalashnikov Modernized Assault Rifle) and then the PK machine gun.

Unlike Samuel Colt or John Browning who became rich for their designs, Kalashnikov claimed he was more motivated by the service to his country, and reportedly made no direct profit from weapons production.

When it comes to Eugene Stoner it is likely many people who own a version of the rifle he designed may not know his name. Today, his AR-15 is simply iconic—loved by shooters and loathed by gun-grabbing politicians—but in 1954 when Stoner went to work as chief engineer at ArmaLite his designs were in a word "radical." His only success at that point was the AR-5 survival rifle, which was adopted by the U.S. Air Force.

Stoner's next design was the AR-10, a lightweight select-fire infantry weapon. While today that firearm has found new respect, it was rejected by the U.S. Army in favor of the M-14. However, some in the military liked what they saw and Stoner revised the concept to accommodate the smaller caliber .223 Remington cartridge, and this AR-15 was soon adopted by the United States military as the M-16.

The M-16 would go on to have its baptism of fire in Vietnam, but eventually would be a respected firearm that found use in both the military and commercial markets. While Stoner is most famous—if famous at all—for his AR-15/M-16, he continued to design small arms for the military. He developed the Stoner 63 Weapons System—the only weapon he developed to even have his name on it—a modular system that could be reconfigured to a standard automatic rifle, light machine gun, medium machine gun, or even a solenoid-fired fixed weapon platform. While it was liked by U.S. Special Forces the concept was simply too radical for the military at the top.

Stoner may not have gotten fame and recognition, but when he met Mikhail Kalashnikov in person Stoner flew to the meeting in his own plane, and told the Russian designer he earned $1 for every M-16/AR-15 sold.