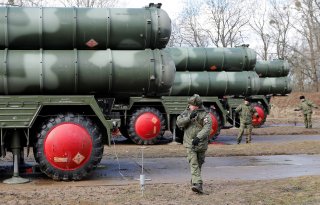 As the Russian invasion of Ukraine continues to unfold, Belarusian president Alexander Lukashenko is requesting advanced missile systems from Moscow.

"The military hardware turned out to be insufficient for us. We will have sufficient personnel but hardware [will not be enough],” Lukashenko said during a meeting of his Security Council. “I turned to [Russian president Vladimir] Putin so that in addition to the S-400 systems located in the Gomel Region, additional S-400s could be supplied to the area slightly west of Minsk.”

It is not entirely clear from Lukashenko’s wording if he is asking Putin to deploy Russian S-400 systems on Belarusian territory or transfer these systems into Belarusian possession. Lukashenko repeatedly voiced his desire to purchase S-400 systems in speeches and interviews over the course of 2021, but the state of any such negotiations remains uncertain. Two Russian S-400 “Triumf” missile defense systems were transferred to Belarus earlier to participate in the joint Russian-Belarusian Union Resolve 2022 military exercises. The Russian troops apportioned for those exercises—which were scheduled for mid-February—began crossing from Belarus’ southern border into Ukraine shortly following Putin’s decision to invade the country.

Lukashenko made news yesterday after a photo was released that showed him standing in front of what appeared to be an invasion map. The map showed planned Russian troop movements from southern Ukraine into Moldova’s breakaway region of Transnistria and depicted Ukraine being divided into four parts, highlighting lines of attack that have already been executed by invading Russian forces.

Widely seen as one of the main enablers of ongoing Russian military aggression against Ukraine, Belarus has fallen under a new wave of EU sanctions. “Lukashenko's regime is complicit in this vicious attack against Ukraine. So we will hit Lukashenko's regime with a new package of sanctions,” EU president Ursula von der Leyen said in a statement on Sunday. The sanctions package, unveiled today, targets Belarusian officials and military personnel who are believed to have abetted Russia’s invasion of Ukraine. “We will introduce restrictive measures against their most important sectors. This will stop their exports of products from mineral fuels to tobacco, wood and timber, cement, iron, and steel,” she added.

The Belarusian president has consistently rebuffed allegations from Ukrainian officials that he is planning to send troops to aid Russia’s invasion of Ukraine. Lukashenko previously offered to host peace talks between Russia and Ukraine in Minsk. Lukashenko said on Monday that while Ukrainian president Volodymyr Zelenskyy called him an “aggressor” in an earlier phone conversation, they also “managed to reach an accord” on the need for Ukraine to continue peace negotiations with Russia. Aides to Zelenskyy confirmed that the second round of Russian-Ukrainian talks will proceed on Wednesday, with Russian state media adding that the upcoming negotiations will be held on Belarusian territory.