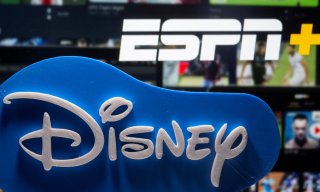 Disney launched ESPN+ back in the spring of 2018, more than a year before the same company launched Disney+. ESPN+ offers streaming access to a wide variety of sports, in addition to original programming, as well as the archive of ESPN’s well-received 30 for 30 documentary series. But ESPN+ does not offer everything that's on the ESPN channels, or anything close to it, and is not marketed as a replacement for standard ESPN.

In its second-fiscal-quarter earnings, announced earlier this week, Disney added subscribers to all three of its major streaming services, Disney+, Hulu, and ESPN+, with the latter adding one million subscribers in the quarter. That brought the sports service to a total of 22.3 million.

But even with that success, Disney’s CEO indicated this week that the company is eying something bigger when it comes to sports streaming.

On the earnings call, as reported by Deadline, chief executive Bob Chapek discussed a future “over the top” sports streaming service. “It will be the ultimate fan offering,” Chapek said of the proposed service. “It will appeal to superfans that really love sports, and I think there’s nobody but ESPN who could frankly pull that off. We don’t have a lot of specifics when it comes to structure, but we do believe that because sports is so powerful — in fact, in the last quarter, 46 of the top 50 most-viewed programs on linear TV were sports.”

Chapek did not go into many specifics about what the new product will look like, when it might launch, what it will cost, or what it will be called. When asked about the economics of the sports streaming question, Chapek told analysts that “we’re not ready to share the specifics of our models in terms of how it would take for us to reach profitability on that or the impact it would have on our linear business.”

Netflix’s announcement at the start of the earnings season in early April that it lost subscribers in the first quarter was seen by some as a sign that the streaming economy was facing a reckoning. However, as Netflix’s competitors have announced their own earnings, they have generally added subscribers, with many of Netflix’s problems specific to Netflix itself.

“As we look ahead to Disney’s second century, I am confident we will continue to transform entertainment by combining extraordinary storytelling with innovative technology to create an even larger, more connected, and magical Disney universe for families and fans around the world,” Chapek said in the quarterly release.