Beyond the War: How the Pentagon Will Defend Ukraine 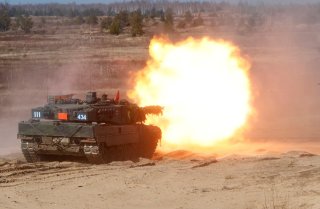 The Pentagon is now closely working with its European allies to craft a “longer-term” support strategy for Ukraine, given that the war is evolving into a protracted military conflict.

The planning will likely move into the implementation stage soon, as U.S. defense secretary Lloyd Austin is set to travel to Germany on April 26 to meet with allies regarding the situation in Ukraine. Austin will host a Ukraine Defense Consultative Group at Ramstein Air Base, Pentagon press secretary John Kirby said.

“Part of the agenda will be to talk about Ukraine ‘s long-term defense needs in a postwar environment and what that might look like,” Kirby said. “The secretary ... believes that it ‘s not too soon to begin to have a longer-term discussion with allies and partners about what Ukrainian sovereignty needs to look like going forward.”

The overall effort is both international and multifaceted as the Pentagon is also taking specific steps to further engage its defense industry partners regarding ways to help Ukraine. For example, Deputy Defense Secretary Kathleen H. Hicks met with leaders of U.S. defense contractors to discuss production of the very kinds of systems, equipment, and weapons the United States is sending to Ukraine, a Pentagon report said.

“We wanted to make sure that we had a good, honest, candid discussion with these CEOs about the systems that they ‘re producing; about the rate at which they ‘re being produced; about the possibility for accelerating some of those production lines and expanding them based on the heavy draw on our inventory to support Ukraine,” Kirby said.

Enlisting the help of industry might help drive key innovations or set up the infrastructure for accelerated additional production of weapons and systems of great value to Ukraine. For instance, Raytheon could rev up Javelin production to ensure a steady flow of new anti-tank weapons or Northrop Grumman might have an opportunity to increase its production of drones for Ukraine. Maybe there are export variants of some larger platforms which could help Ukraine as well.

Many of the Pentagon’s defense industry partners have extensive experience developing and quickly producing needed technologies for war in response to Joint Urgent Operational Needs requests, many of which emerged during the ongoing wars in Iraq and Afghanistan.

Kris Osborn is the Defense Editor for the National Interest. Osborn previously served at the Pentagon as a Highly Qualified Expert with the Office of the Assistant Secretary of the Army—Acquisition, Logistics & Technology. Osborn has also worked as an anchor and on-air military specialist at national TV networks. He has appeared as a guest military expert on Fox News, MSNBC, The Military Channel, and The History Channel. He also has a Master ‘s Degree in Comparative Literature from Columbia University.