Drones Are Keeping Ukraine in the Fight With Russia 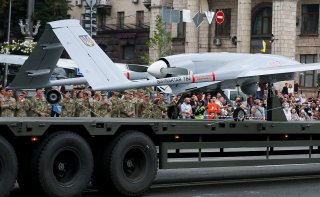 As the war in Ukraine drags on into its second month, the Russian military claims it has destroyed just under 400 Ukrainian unmanned aerial vehicles (UAVs) and scores of other types of military equipment.

Ukraine’s military said it has successfully employed its inventory of combat drones—particularly its Turkish-supplied Bayraktar TB2 drones—to ambush and whittle down Russian armored columns. Last week, Ukrainian military officials told Western reporters that drone attacks played a substantial role in stymying the forty-mile-long Russian convoy that menaced Kyiv throughout March. Most Ukrainian claims regarding battlefield successes with combat drones have not been fully verified by a third party. Imaging showed that the Russian column, which reportedly suffered from significant logistics issues, was eventually dispersed and redeployed into smaller units near Kyiv.

The Russian Defense Ministry claimed on March 7 to have taken out seventy-eight Ukrainian drones since the start of the war. According to the Kremlin’s published figures, the Russian military destroyed just over 300 additional Ukrainian drones within the span of one month. If confirmed, Konashenkov’s latest figures regarding drone kills may indicate that the invading Russian forces are slowly adjusting to Ukrainian drone tactics as they seek to consolidate control in Ukraine’s east and southeast. In mid-March, the pro-Russian separatist Donetsk People’s Republic (DPR) announced that Russia is establishing a no-fly zone in the eastern Donbas region. Russian drones—including the Eleron-3 and Orlan-10—were largely absent in the invasion’s opening stages, but they are playing an increasingly important intelligence, surveillance, and reconnaissance role as the war rolls on.

It is unclear how many Ukrainian drones are still flying over one month into the war in Ukraine; nevertheless, the West has committed to replenishing the Ukrainian military’s allegedly dwindling drone inventory. Washington announced in March that it will supply Kyiv with at least 100 Switchblade combat drones as part of an incoming $300 million lethal aid package. The man-portable Switchblade 600 variant can threaten Russian vehicle groups with its anti-armor warhead and is capable of loitering over its targets for over forty minutes.