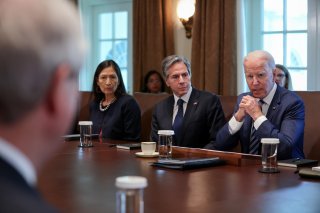 After the Senate’s approval of the 2022 National Defense Authorization Act, or NDAA, by a wide margin on Wednesday, the bill has been sent to President Joe Biden’s desk, where he is expected to sign it in the near future.

The bill authorizes $777 billion in defense spending for 2022, a 5 percent increase over the military budget in 2021. It was overwhelmingly supported by both parties in the House and Senate, although some progressive Democrats objected to its price tag and argued that the money could be better spent on nonmilitary needs such as social services and climate change action.

National security hawks praised the bill, justifying it on the basis that increasing U.S. competition from China required a stronger U.S. response.

Rep. Elaine Luria (D-Va.), who voted for the bill, tweeted on December 7 that the bill “makes critical investments in our national defense, and takes important steps to counter the threat of a rising China.”

Sen. Jim Inhofe (R-Okla.), the ranking Republican member of the Senate Armed Services Committee, claimed that the focus on Chinese threats to the United States was long overdue.

“The threat that the Chinese military poses is not a distant threat,” the senator said in April during the initial NDAA negotiation process. “It’s a problem we face today. Right now.”

Although commercial ties between the United States and China remain strong, political tensions have raised the temperature in the Washington-Beijing relationship, particularly over China’s perceived attempts to dominate the Indo-Pacific area.

Chinese President Xi Jinping has also vocally threatened to reunify Taiwan, the de facto independent island off China’s coast, with the mainland. Although the People’s Republic of China has never governed Taiwan, it has considered it an integral part of its territory since its founding in 1949.

Tensions were also strained in the fall after the United States agreed to supply Australia with nuclear submarines in the “AUKUS” deal, which officials in Beijing argued was directed at containing it. The China-Australia relationship has also been placed under strain over the past half-decade, particularly since the onset of the COVID-19 pandemic; in early December, the government of Australia joined the United States, United Kingdom, Canada, and Japan in a diplomatic boycott of the Winter Olympics in Beijing over China’s human rights abuses against Uyghur Muslims in its western Xinjiang province.

During the NDAA negotiations, Pentagon officials explicitly cited the rivalry with China as a justification for the increased budget. Deputy Defense Secretary Kathleen Hicks argued in May that the budget would “take [...] a clear-eyed approach to Beijing and provide [...] the investments to prioritize China as our pacing challenge.”

Although China’s military budget has steadily increased over the past decade, it reached $209 billion in 2021 - less than a third of what the U.S. appears poised to spend in the coming year.