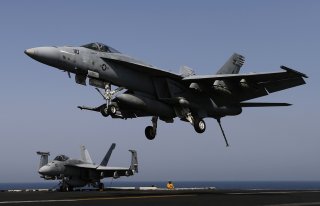 The National Defense Authorization Act (NDAA), a massive defense spending omnibus bill, was passed by the Senate on Wednesday in an overwhelming bipartisan vote, with eighty-eight senators in favor and eleven against.

The House of Representatives passed the bill earlier in the month with 363 lawmakers in favor of it and seventy opposed.

Despite ongoing partisan rancor in Congress, the NDAA’s annual authorization is typically not contested along partisan lines. Sens. Jack Reed (D-R.I.) and Jim Inhofe (R-Okla.), the committee’s chairman and ranking Republican, praised the bill’s passage in a joint statement, arguing that it reinforced America’s credibility around the world and belied perceptions of partisan gridlock.

“This bill sends a clear message to our allies—that the United States remains a reliable, credible partner—and to our adversaries—that the U.S. military is prepared and fully able to defend our interests around the world,” Inhofe claimed.

President Joe Biden is expected to sign the bill.

The bill’s total cost is $777 billion, which is roughly $25 billion higher than the president had asked for. Of this, $740 billion is slated to go directly to the Pentagon. $27 billion is set aside for the Department of Energy, which manages the U.S. nuclear stockpile. Finally, $10 billion has been allocated for miscellaneous defense needs outside of the bill’s typical purview.

In addition to funding the Defense Department for the coming year, the bill provided changes to military policy, including updates to the military justice system’s handling of sexual assault cases in light of several high-profile incidents over the past year. Also, it included a 2.7 percent pay raise for U.S. troops, budgeted $300 million in additional aid for the Ukrainian military, and established an “Afghanistan War Commission” to study the causes for the failure of America’s twenty-year war there.

Although the bill passed by wide margins in both houses, its high cost has been attacked, particularly by progressive Democrats who have argued that the defense budget could be better used to provide greater social services and address other urgent priorities, including climate change.