Biden Nixes Plan to Give Polish Fighters to Ukraine 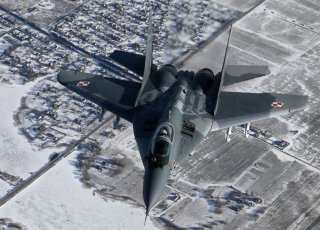 Even before Russia launched its unprovoked attack, Ukrainian president Volodymyr Zelenskyy had called for the United States and other NATO members to provide his nation with warplanes to defend his homeland.

On Tuesday, Poland offered to transfer its fleet of Soviet-era MiG-29 fighters to the United States for delivery to Ukraine.

The Mikoyan MiG-29 was developed late in the Cold War and entered service with the Soviet Union's Air Force in July 1982. It is currently reported to be the fifth most common combat aircraft in the world. Continually updated, the MiG-29 will likely remain in service for decades to come. More importantly, it is an aircraft that pilots in Ukraine have experience with and could make a significant difference in stopping the Russian onslaught.

However, the deal to transfer the Polish aircraft was rejected by the Department of Defense, which warned that such a transfer could be seen as a provocation and escalate tensions with Moscow. Pentagon press secretary John Kirby said via a series of posts on social media on Tuesday evening that the Pentagon did not believe Poland's proposal was "tenable."

"It is simply not clear to us that there is a substantive rationale for it," Kirby explained. "We will continue to consult with Poland and our other NATO allies about this issue and the difficult logistical challenges it presents, but we do not believe Poland's proposal is a tenable one."

The Pentagon spokesman said that the transfer of the Polish Air Force's jets was a matter for Warsaw and that the United States Should not get involved.

"The prospect of fighter jets at the disposal of the Government of the United States of America' departing from a U.S./NATO base in Germany to fly into airspace that is contested with Russia over Ukraine raises serious concerns for the entire NATO alliance," Kirby added.

Poland's announcement had reportedly caught the Biden administration off guard. Warsaw's offer came just a day before Vice President Kamala Harris was scheduled to arrive for what is seen as a high-stakes visit, CNN reported.

The decision by Washington not to try to make the deal work has already sent shockwaves throughout the NATO alliance. The European news media was quick to condemn the decision.

"Is this the moment when Joe Biden lost the war against Russia? The moment when Poland’s MiG-29 fighter jets, delivered indirectly via the US to gallant Ukraine, could have made the vital though marginal difference between peace and war, between subjugation and freedom in Ukraine?," pondered Sean O'Grady, associate editor of the Independent.

"If America won’t lead the west in this resistance, and fight for Ukraine, why would they fight for Estonia, Poland … or Germany even? The answer that they are all Nato members means nothing if the calculus is that America doesn't wish to be involved in foreign wars and has turned isolationist," added O'Grady. "If Putin miscalculates, and America really is willing to fight for Poland, then we will end up with a third world war anyway."