Biden Promises No ‘New Cold War’ After Meeting With Xi 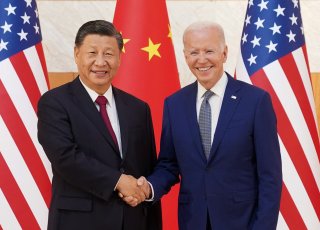 President Joe Biden and Chinese leader Xi Jinping met on the sidelines of the G20 summit in Indonesia on Monday in a bid to manage mounting tensions in the China-U.S. relationship.

“President Biden explained that the United States will continue to compete vigorously with the PRC, including by investing in sources of strength at home and aligning efforts with allies and partners around the world,” said a White House readout. Biden “raised concerns about PRC practices in Xinjiang, Tibet, and Hong Kong, and human rights more broadly,” the statement read. Secretary of State Antony Blinken accused China last year of committing genocide against its Uyghur population in the northwestern Xinjiang province. Beijing has strongly rejected international claims of human rights abuses by Chinese authorities in Xinjiang, with China’s foreign minister Wang Yi denouncing such accusations as “ridiculously absurd” and a “complete lie.”

The readout stressed that Washington’s “One China” policy has not changed, adding that the “United States opposes any unilateral changes to the status quo by either side,” and that the “world has an interest in the maintenance of peace and stability in the Taiwan Strait.” The clarification came on the heels of prior statements by Biden that appeared to signal a shift away from Washington’s long-standing practice of maintaining strategic ambiguity on whether or not it would intervene to defend Taiwan from a Chinese invasion and accusations by Beijing that the United States has abandoned its commitment to its One China policy, which has served for decades as a key pillar of China-U.S. relations.

Biden told reporters following the meeting he does “not think there's any imminent attempt on the part of China to invade Taiwan,” tamping down previous concerns among some in Washington that Beijing is planning a full-scale assault on the self-governing island. “It’s the same exact position we’ve had. I made it clear that we want to see cross-strait issues peacefully resolved. And, so it never has to come to that,” Biden added.

The talks came as an attempt to ameliorate years of mounting tensions between Washington and Beijing. “We’re going to compete vigorously.  But I’m not looking for conflict, I’m looking to manage this competition responsibly,” Biden said at a news conference in Bali. “I’m not suggesting it’s going—this is kumbaya, you know, everybody is going to go away with everything in agreement. But I do not believe there’s a need for concern of, as one of you raised the legitimate question, a new Cold War.”