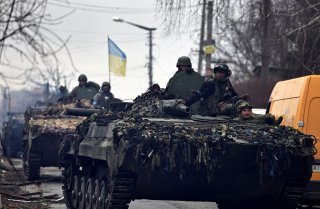 Secretary of State Antony Blinken announced on Sunday that the State Department intended to investigate evidence of atrocities in the Ukrainian city of Bucha, a suburb of Kyiv that was occupied by the Russian military until earlier in the week. The images, which were widely circulated on social media after Ukrainian forces recaptured the town, depicted dozens of civilians executed in the street, many with their hands tied behind their backs.

“You can’t help but see these images as a punch to the gut,” Blinken told CNN yesterday. “We’ve come out and said that we believe that Russian forces have committed war crimes, and we’ve been working to document that, to provide the information we have to the relevant [institutions] and organizations that will put all of this together.”

While Blinken stopped short of describing the Bucha massacre as a “genocide”—a highly charged term dependent on the guilty party’s intent as well as its actions—he reiterated that the U.S. government will “look hard and document everything that we see,” adding that with hard evidence, other institutions could then “assess exactly what took place in Ukraine, who’s responsible, and what it amounts to.”

Ukrainian president Volodymyr Zelensky was more explicit in his condemnation, insisting on Sunday that the Bucha massacre amounted to genocide. "Indeed, this is genocide. The elimination of the whole nation and the people," Zelensky told CBS News.

“We are the citizens of Ukraine. We have more than one hundred nationalities. This is about the destruction and extermination of all those nationalities,” he said.

Russia has denied responsibility for the massacre, and Russian state-run media outlets have simultaneously claimed that the killings did not really happen and that Ukrainian neo-Nazis carried them out.

The furor surrounding the massacre has led to growing pressure on the Biden administration to supply Ukraine with more powerful weapons systems, including Soviet-era tanks. Blinken declined to offer specifics when asked on Sunday if the United States is involved in facilitating the transfer of tanks to Ukraine. Blinken highlighted instead that the United States has continued to supply Javelin and other missile systems to Ukraine, noting that Ukraine would soon have ten anti-tank missile systems for each Russian tank.

"Across the board, what we're trying to do is make sure the Ukrainians have the systems they need that they can use and they can use right away," Blinken said.