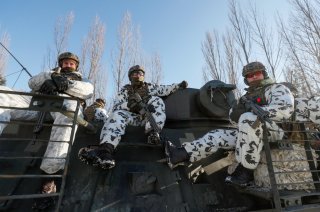 The Ukrainian military has launched a fresh counteroffensive to drive Russian forces back from Kiev and other key cities, according to local officials.

The Kiev suburbs of Irpin, Bucha, and Hostomel have reportedly seen renewed urban combat operations and shelling exchanges as the Ukrainian military attempts to deny the invading Russian forces advantageous positions from which to launch an all-out assault on Kiev, according to the Wall Street Journal. Ukraine announced on Tuesday that its military had carried out an airstrike against Kherson International Airport, destroying or severely damaging three Russian helicopters. Kherson is the only regional capital to be captured by the Russian military since the invasion began on February 24. Ukrainian forces say they are advancing off the southern port city of Mykolaiv in the direction of Kherson, though it remains unclear if they intend to retake the city.

Mykolaiv is a crucial milestone on the Russian forces’ path to the southwestern port hub of Odessa, control over which is necessary if Russia intends to seal the Ukrainian military off from the country’s Black Sea coast. Much of the reporting concerning Ukrainian military movements is based on the first-hand assertions of Ukrainian officials and cannot be conclusively verified.

A U.S. defense official told reporters on Monday that the Russian military still has not been able to secure air superiority, much less air dominance, in the skies of Ukraine. “We still maintain that the airspace is contested, that the Russians have not achieved air superiority over all of Ukraine,” the official said. “I can’t speak to the Ukrainians air plan, it changes every day, they’re being … appropriately careful with their air assets and how they’re using them and what they’re using them for.”

According to the latest Ukrainian figures, as many as 13,500 Russian troops have been killed since February 24. Recent U.S. intelligence estimates, cited by the New York Times, put that number closer to 7,000. The Kremlin last commented on Russian troop deaths on March 2, when Defense Ministry spokesman Igor Konashenkov claimed 498 Russian soldiers had been killed since Vladimir Putin announced what Russia refers to as a “special military operation” in Ukraine.

Twenty-two days into the war, the invading Russian forces continue to face significant resistance along their main axes of advance. Battlefield gains in the south and around Kiev could bolster Ukraine’s position in ongoing talks, as both sides cautiously signal signs of progress toward a peace deal. Ukrainian president Volodymyr Zelenskyy said earlier this week that the negotiations between Kiev and Moscow, which are entering their fifth round, were beginning to sound “more realistic.” However, Zelenskyy still emphasized that more time is needed to secure an agreement beneficial to Ukraine.