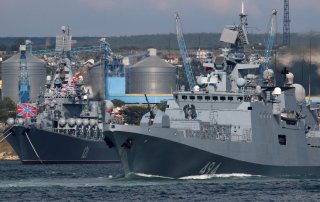 Sweden will supply anti-ship missiles to Ukraine, according to a top official.

"The proposals that are submitted [to parliament] mean that allocated funds for the central government budget will increase by SEK 1.0 billion ($102 million) in 2022," Sweden’s finance minister, Mikael Damberg, and Defense Minister Peter Hultqvist said in a statement on Thursday, according to Reuters. "In solidarity with Ukraine, and as part of the international response to Russia's actions, the government sees a continuing need to support Ukraine," the statement added.

Sweden’s latest tranche of Ukraine aid follows shortly on the heels of a $700 million security assistance package announced by the U.S. Department of Defense. The package includes an undisclosed number of High Mobility Artillery Rocket Systems (HIMARS), which will allow Ukrainian forces to strike Russian targets at greater standoff distances.

The White House said in May that it is working on a plan to supply Ukraine with advanced anti-ship missiles to beat back Russia’s naval blockade of the country’s strategically vital Black Sea coast. U.S. officials told Reuters that Boeing’s Harpoon missile and Kongsberg and Raytheon’s Naval Strike missile are under active consideration; the missiles would either be shipped directly to Ukraine by the United States or transferred by a European ally.

The Pentagon announced in late May that Denmark has agreed to send long-range anti-ship missiles to Ukraine. “I’m especially grateful to Denmark, which announced today that it will provide a Harpoon launcher and missiles to help Ukraine defend its coast,” said Secretary of Defense Lloyd Austin.

Ukraine’s domestically-produced Neptune missile, derived from the Soviet Kh-35 anti-ship missile, entered service in 2021, but it is unclear how many such missiles are currently stocked by the Ukrainian military. Two Neptune missiles, reportedly fired from the Odessa region, sank the Russian Black Sea Fleet’s flagship, the Moskva, in April, registering one of the most significant combat losses in recent naval history.

Kyiv has repeatedly appealed to the west for anti-ship missiles, but the delivery of these weapons to Ukraine has been stymied by their considerable training and maintenance requirements. Ukraine does not possess a viable navy and thus lacks the capability to deploy such missiles from ships, nor does it field a large number of compatible land-based launchers.