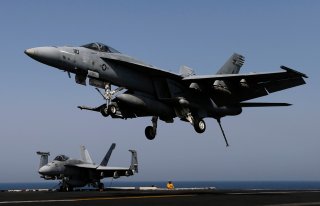 Defense contractor Boeing has announced its interest in supplying the F/A-18 Block III Super Hornet fighter jet to the Indian Navy. The jet has earned a reputation of being among the most lethal, advanced, combat-proven, multi-role frontline fighters in service today. The Block III variant can perform in virtually every mission in the tactical spectrum including air superiority, day/night strike with precision guided-weapons, fighter escort, close air support, suppression of enemy air defense, maritime strike, reconnaissance, forward air control, and buddy refueling.

There are now more than 700 F/A-18 Hornets and Super Hornets in operation, and the Block III version is currently being manufactured for the U.S. Navy. New Delhi has expressed interest in obtaining the advanced fighter jet for its own navy.

“We have responded to the Indian Navy's Request for Information (RFI) for the Multi-role Carrier Borne Fighters programme,” Boeing Defense India (BDI) said in a statement to the Indian news out BusinessLine. “The F/A-18 Block III Super Hornet, the frontline fighter of the US Navy, is on offer to the Indian Navy. It will offer the most contemporary war-fighting capabilities to the Indian Navy while enhancing cooperation between the Indian Navy and US Navy.”

The pitch was reportedly made to the Indian Navy by BDI, which was established in 2017. The F/A-18E/F, which was designed as a carrier-based fighter for high-loading, high-stress operations, requires minimal support equipment. BDI has said the aircraft requires minimal support equipment and would offer “impressive low cost per flight hour” with high mission readiness. The Super Hornets would be sustained in India through BDI's “For India – By India” program, which includes leveraging existing programs, growing supply chain capabilities, and partnering with the local industry.

This sustainment would be conducted in a partnership with the Indian armed forces as well as Indian and American-based partners throughout the lifecycle of the platform.

It isn't clear which version of the F/A-18 Super Hornet the Indian Navy might be considering. The F/A-18 E/F Super Hornet, which is now manufactured by Boeing following its 1997 merger with the aircraft's original development firm McDonnell Douglas, is produced as two distinct versions. This includes the single-seat F/A-18/E and the dual-seat F/A-18/F.

Enough Fighters to Take on China

The Super Hornet, despite its age, could give the Indian Navy some added punch.

The Super Hornet has weapons stations, including two wing store stations, and it is able to fulfill a range of armaments that include AIM-9 Sidewinder; AIM-7 Sparrow and AIM-120 AMRAAM air-to-air missiles; guided air-to-ground weapons such as Harpoon, SLAM/SLAM-ER, GBU-10, GBU-51, HARM and Maverick; and free-fall air-to-ground bombs, Mk-76, BDU-48, Mk-82LD, Mk-82HD, and Mk-84.

The aircraft is also equipped with a General Dynamics M61A2 20mm Gatling-style gun, a hydraulically-driven, six-barreled, rotary action, air-cooled, electrically fired weapon that offers selectable rates of either 4,000 or 6,000 rounds per minute.

Boeing's push to India comes as the F/A-18 Super Hornet could have its wings clipped by the U.S. Navy. While Boeing won a $4 billion multi-year contract to build seventy-eight of the fighters through Fiscal Year 2021, next year's order of two dozen tactical aircraft will likely be the last in the program.

The U.S. Navy has begun to ramp up efforts to find a replacement for the Super Hornet, and in August announced it would cut production to accelerate the development of the next-generation carrier-based fighter program.