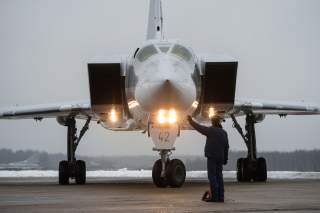 The Tu-22M can be counted amongst the prodigious ranks weapon systems misleadingly named for political reasons. In the 1960s, the Soviet Union developed a pointy-nosed Tu-22 supersonic jet bomber (codenamed “Blinder” by NATO) with two turbojets slung over the tail that resembled a rocket ship straight out of Buck Rodgers. However, the Blinder suffered numerous deadly mishaps—the downwards-firing ejection seats were not popular on a plane prone to landing accidents—and the airframe’s aluminum skin tended to warp at high speeds, a problem for a jet designed to fly one-and-a-half times the speed of sound.

In the end, the Soviets mostly relegated the Tu-22 to reconnaissance, jamming and maritime strike roles—but went back to the drawing board seeking a new supersonic bomber. However, because the VVS (Soviet Air Force) was competing for funding with the ballistic missile branch, it attempted to hide the failure of the Tu-22 by branding the new aircraft as being merely an upgraded model, the Tu-22M. Even NATO wasn't fooled, giving the plane the new codename "Backfire" (it became popular with Soviet pilots!) and for years mistakenly believed its ‘real' designation was the Tu-26.

The Backfire’s swing-wings allowed it to spread its wings to a 25-degree angle for added lift during takeoff and landing—or to tuck them inwards up to 65 degrees to maximize supersonic performance. Powered by two boxy side-slung NK-25 turbofans, the ultimate Tu-22M3 Backfire-C model could nearly attain twice the speed of sound. The crew of three or four anachronistically included a tail-gunner/radio operator who remotely controlled a twin-barreled 23-millimeter cannon which could also shoot out missile decoy rounds.

The speedy bomber had two different mission profiles: it was either intended to cruise towards a target in Europe or China at high altitude, then dive down to low altitude as it approached enemy air defenses and sprint to supersonic speeds to unleash a huge payload of up to twenty-four tons of gravity bombs.

Its other role was to hunt down U.S. carriers using real-time satellite intelligence—and once within three to four hundred miles range, release two or three hulking Kh-22 anti-ship cruise missiles slung under the belly. The 11.5-meter long missiles would accelerate towards their targets at four-and-a-half times the speed of sound, guided in their terminal approach by a radar-homing seeker. Later Backfires added the capability of lugging up to ten smaller Kh-15 nuclear-tipped anti-ship missiles with a range of 184 miles.

However, the Backfire’s range of 4,200 miles was inadequate for striking North America unless it employed the aerial refueling probe which jutted from its nose like the horn on the snout of a prehistoric beast. Therefore, while negotiating the SALT II arms control agreement, the United States insisted the Tu-22s have the probes removed, lest they be included in the count of “strategic” bombers.

In any case, like its predecessor, the Tu-22M was bedeviled by difficult handling and poor reliability, with operational units only able to muster up to 40 percent of the airframes, and engine overhauls required after only fifty flight hours! One head of the VVS (a former bomber pilot!) even tried pressing charges on the Tupelov design bureau for the problems, though some were gradually ironed out in the later M2 and M3 models.

Tu-22Ms did perform satisfactorily during combat deployments bombing targets first towards the end of the Soviet War in Afghanistan and later targeting the Chechnyan capital of Grozny. However, the Backfire was never exported, though there were rumors of an attempted Indian lease, and later in 2013, interest in a purchase from China.

Backfire for the 21st Century?

Out of nearly 497 Backfires built (mostly M2 and M3 models), Russia still operates 67 Tu-22M3s bombers in its 200th and 52nd Guard Heavy Bomber regiments. Like Russia’s slower but longer-range Tu-95 Bear bombers, the Backfires have been used to probe the air defense systems of NATO countries and Japan, and practice stalking and making mock attack runs on U.S. Navy carriers—both to gather intelligence and to troll Moscow’s potential adversaries. Since 2016, Backfires have also been deployed bomb anti-Assad rebels in Syria in highly publicized raids, as you can see in this video.

However, even by the time of the Backfire's introduction to service late in the Cold War, supersonic speed and low-altitude penetration simply were not adequate protection against modern anti-aircraft missiles and radars. Five to nine of the Backfire's supersonic predecessor, the Tu-22, were shot down flying combat missions for Libya and Iraq during the 1980s. Then during the August 2008 Russo-Georgian war, a Tu-22M3R reconnaissance model (one of twelve equipped with signal-intelligence gear and a side-looking radar) was shot down by a Georgian Buk-M1 (SA-11) missile system near Gori, it's navigator killed and two other crew captured.

The Backfire remains viable, however, as a long-range cruise missile carrier, enabling it to deliver deadly weapons against ships and ground targets without entering the range of retaliation. Already, the Tu-22M3 is likely capable of releasing its weapons without entering interception range of U.S. Navy carrier task force, now that the U.S. Navy’s F-14 Tomcat fighters have been retired.

One simple measure to increase the effective strike range of the Tu-22M is to increase the range of its missile. Supporting these longer-reaching weapons explains why Russia began upgrading thirty of its Backfires to the new Tu-22M3M model, the first of which was rolled out on August 2018 (video here). However, flight testing, due to begin in October 2018, has been delayed according to recent reports.

The M3M model has had 80 percent of its avionics ripped out and replaced with a new radar, navigation GLONASS navigation system (the Russian equivalent to GPS), modern digital glass cockpit and engine controls and electronic warfare countermeasures. Its range has also reportedly been increased by an unspecified amount.

However the big news is the capability to launch improved model of the Kh-22 missile, the Kh-32, that has a smaller warhead but increased to over 600 miles, and is designed to soar up to 130,000 feet high before beginning a terminal dive at four-and-a-half times the speed of sound, using a higher-definition radar seeker that can pinpoint both sea and ground targets. Russian industry sources claim the Backfire also has artificial intelligence systems to enhance targeting.

The Backfire may also serve as a carrier for up to four hypersonic Kh-47 Kinzhal (“Dagger”) air-launched ballistic missiles, which have a maximum claimed speed of ten times the speed of sound, and supposedly can perform evasive maneuvers. For now, the Kinzhal is deployed exclusively on MiG-31 Foxhound interceptors, but Russian media claims that missiles deployed to Backfire bombers will boost effective striking distance over 50 percent to 1,900 miles. Both the Kh-32 and Kinzhal can carry nuclear warheads.

As pointed out by Charlie Gao in this earlier article, weapons such as the Kh-55, which has a range of 1,300 miles, would transform Backfire into a ‘strategic’ weapon—regardless of whether the new Tu-22M3M has a refueling probe, which some reports suggest may be the case—though none is evident in the available footage of the lead M3M aircraft.

In any case, while Backfire’s viability in a high-intensity conflict may primarily be confined to the naval strike role, the M3M upgrade could ensure that’s a mission the Cold War bomber could perform effectively and relatively safely using long-range weapons.

Pakistan’s Stalled F-16 Deal is a Win For India